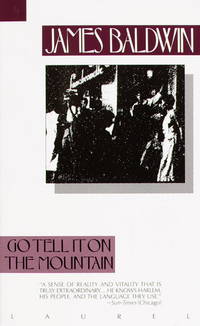 "Nothing but the darkness, and all around them destruction, and before them nothing but the fire-a bastard people, far from God, singing and crying in the wilderness!" First published in 1953, Baldwin's first novel is a short but intense, semi-autobiographical exploration of the troubled life of the Grimes family in Harlem during the Depression. 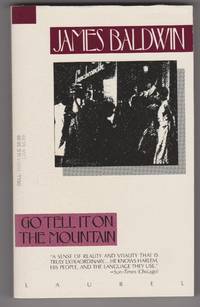 Description:
Laurel / Dell, New York, 1975. 20th paperback printing. Condition: Near fine, very light edge and corner wear.Go Tell It On The Mountain, first published in 1953, is Baldwin's first major work, a semi-autobiographical novel that has established itself as an American classic. With lyrical precision, psychological directness, resonating symbolic power, and a rage that is at once unrelenting and compassionate, Baldwin chronicles a fourteen-year-old boy's discovery of the terms of his identity as the stepson of the minister of a storefront Pentecostal church in Harlem one Saturday in March of 1935. Baldwin's rendering of his protagonist's spiritual, sexual, and moral struggle of self-invention opened new possibilities in the American language and in the way Americans understand themselves.
Item Price
US$5.34
US$12.30 shipping to USA