Description:
PublicAffairs, 2000. Hardcover. Good. Disclaimer:A copy that has been read, but remains in clean condition. All pages are intact, and the cover is intact. The spine may show signs of wear. Pages can include limited notes and highlighting, and the copy can include previous owner inscriptions. At ThriftBooks, our motto is: Read More, Spend Less.Dust jacket quality is not guaranteed.
Item Price
US$4.28
FREE shipping to USA

Description:
PublicAffairs, 2000. Hardcover. As New. Disclaimer:An apparently unread copy in perfect condition. Dust cover is intact; pages are clean and are not marred by notes or folds of any kind. At ThriftBooks, our motto is: Read More, Spend Less.Dust jacket quality is not guaranteed.
Item Price
US$4.28
FREE shipping to USA

Description:
PublicAffairs, 2000. Hardcover. Very Good. Disclaimer:A copy that has been read, but remains in excellent condition. Pages are intact and are not marred by notes or highlighting, but may contain a neat previous owner name. The spine remains undamaged. At ThriftBooks, our motto is: Read More, Spend Less.Dust jacket quality is not guaranteed.
Item Price
US$4.28
FREE shipping to USA 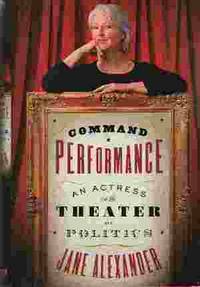 Description:
New York, NY, U.S.A.: PublicAffairs, 2000. 335 Pages Indexed. No noted defects to book. Straight clean no marks or stamps. The author was happily engaged in her actiong career when she was asked to consider becoming head of the ever-embattled National Endowment for Arts. Thisis her witty, opinionated, and wisememoir of her years at the NEA. She had won Tony and Emmy Awards, was a four-timeOscar nominee, starred in dozens o movies and plays, nothing had quite prepared for the role of Madame Chairman. Contents in 14 Chapters: Early Training, The Audtion, The Rehearsal, Curtain Up, The Production, The Scene, The Players, On the Road, Intermission, Act II, The Critics, Hollywood, Backstage, and Curtain Down. Dust jacket has unclipped price $25 and minor stain on bottom inside.. First Edition First Printing Stated. Hard Back. Near Fine/Very Good. 6" x 9 1/2".
Item Price
US$9.00
US$4.25 shipping to USA

Description:
Public Affairs Press, 2000. Hardcover. Near Fine. Remainder mark. Signed by Alexander on the title page. Dust jacket is protected with a mylar cover .
Item Price
US$15.00
US$3.00 shipping to USA

Join the Bibliophile's Club and save 10% on every purchase, every day!