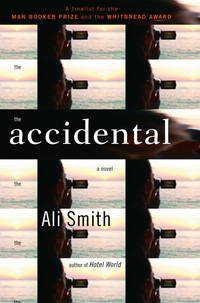 The Accidental: A novel

The Accidental: A novel

Winner of the Whitbread Award for best novel and a finalist for the Man Booker Prize, The Accidental is the virtuoso new novel by the singularly gifted Ali Smith. Jonathan Safran Foer has called her writing "thrilling." Jeanette Winterson has praised her for her "style, ideas, and punch." Here, in a novel at once profound, playful, and exhilaratingly inventive, she transfixes us with a portrait of a family unraveled by a mysterious visitor.Amber--thirtysomething and barefoot--shows up at the door of the Norfolk cottage that the Smarts are renting for the summer. She talks her way in. She tells nothing but lies. She stays for dinner.Eve Smart, the author of a best-selling series of biographical reconstructions, thinks Amber is a student with whom her husband, Michael, is sleeping. Michael, an English professor, knows only that her car broke down. Daughter Astrid, age twelve, thinks she's her mother's friend. Son Magnus, age seventeen, thinks she's an angel.As Amber insinuates herself into the family, the questions of who she is and how she's come to be there drop away. Instead, dazzled by her seeming exoticism, the Smarts begin to examine the accidents of their lives through the searing lens of Amber's perceptions. When Eve finally banishes her from the cottage, Amber disappears from their sight, but not--they discover when they return home to London--from their profoundly altered lives.Fearlessly intelligent and written with an irresistible blend of lyricism and whimsy, The Accidental is a tour de force of literary improvisation that explores the nature of truth, the role of chance, and the transformative power of storytelling.From the Hardcover edition.

Seller rating:
This seller has earned a 5 of 5 Stars rating from Biblio customers.
Biblio.com.au member since: 2017
Barrington, Illinois
Ask Seller a Question

New
A new book is a book previously not circulated to a buyer. Although a new book is typically free of any faults or defects,...[more]

How to identify a rare book