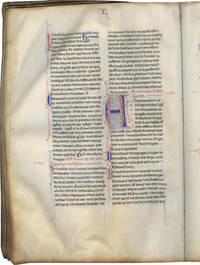 RARE THIRTEENTH-CENTURY OLD FRENCH TRANSLATION OF A MAJOR MEDIEVAL COLLECTION OF CANON (CHURCH) LAW. In French, decorated manuscript on parchment, Northern France (possibly Paris), c. 1250-1275. Dimensions 315 x 225 mm., 72 folios, missing a quire after quire six, and lacking eight additional leaves internally, written in a fairly quick upright gothic bookhand in two columns, 1-line red or blue initials, 3-line alternately red and blue initials, 8-line parted red and blue initial. BINDING: Unbound (lacking front and back boards), a few inches of parchment (loosely attached), either the spine or spine lining, remain at the bottom of the spine, sewn on four bands with head and tail bands. TEXT: The Decretals of Gregory IX, also known as the Liber Extra (The book outside Gratian's Decretum), promulgated in 1234, was the first collection of canon law for the Catholic Church invested with papal authority. Our manuscripts is a rare, unedited Old French translation of these Decretals. It survives in just twelve other manuscripts, in addition to this substantial fragment, none in the United States, and all but one in institutional collections. Our manuscript includes parts of Book II of the text on trials, discussing topics including confessions and witnesses, and most of Book III on the laws governing the lives of the clergy, including discussions related to married clergy, non-resident clerics, benefices, monks and canons, and many other topics. PROVENANCE: written in Northern France, possibly in Paris; our manuscript must date after 1234, the year when the Latin Decretals were promulgated by Pope Gregory IX, and presumably before 1280 when a near contemporary hand wrote that date near the top of f. 29; on f. 14 there is a remarkable and rare contemporary correction on a separate sheet of parchment; modern notes in French on ff. 2 and 10v. CONDITION: first leaf detached and heavily stained (text is legible), frayed at the bottom and outer margins, a large notch excised from the lower margin of f. 3, ff. 1v-17, some staining in the lower and outer margins, fairly minor after the first few folios, cockled, minor damp staining in the upper and outer margins in the second half. Full description and images available. (TM 1097)

leaves
Very generally, "leaves" refers to the pages of a book, as in the common phrase, "loose-leaf pages." A leaf is a single sheet... [more]
Unbound
A book or pamphlet which does not have a covering binding, sometimes by original design, sometimes used to describe a book in... [more]
spine
The outer portion of a book which covers the actual binding. The spine usually faces outward when a book is placed on a shelf.... [more]
Parchment
Pages or book covering made from a prepared animal skin. Parchment describes any animal skin used for books, while vellum is a... [more]
tail
The heel of the spine.

Don't overlook that old city directory - it is priceless for authors, collectors who focus on specific cities, geneaology, and other niche interests. Learn more...