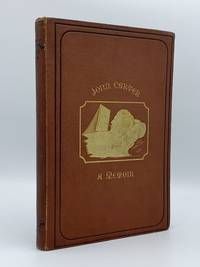 New
A new book is a book previously not circulated to a buyer. Although a new book is typically free of any faults or defects,...[more]
Cloth
"Cloth-bound" generally refers to a hardcover book with cloth covering the outside of the book covers. The cloth is stretched...[more]
G
Good describes the average used and worn book that has all pages or leaves present. Any defects must be noted. (as defined...[more]
shaken
A hardcover in which the text block is loose, but still attached to the binding.
Poor
A book with significant wear and faults. A poor condition book is still a reading copy with the full text still readable. Any...[more]
spine
The outer portion of a book which covers the actual binding. The spine usually faces outward when a book is placed on a shelf....[more]
Fair
is a worn book that has complete text pages (including those with maps or plates) but may lack endpapers, half-title, etc....[more]
verso
The page bound on the left side of a book, opposite to the recto page.
plate
Full page illustration or photograph. Plates are printed separately from the text of the book, and bound in at production. I.e.,...[more]
fine
A book in fine condition exhibits no flaws. A fine condition book closely approaches As New condition, but may lack the...[more]
foxed
Foxing is the age related browning, or brown-yellowish spots, that can occur to book paper over time. When this aging process...[more]