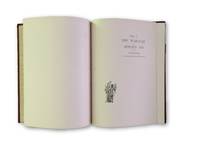 Australian Flora in Applied Art and in Literature

Australian Flora in Applied Art and in Literature

Sydney, 1915. [Scarce study of the waratah in decorative arts. This beautiful work contains illustrated examples of the use of the waratah in many fields of the applied arts, such as architecture (brackets, capitals, columns, ceilings, etc.), bookbinding, ceramics, electric fittings, glassware, ironwork, lace, wallpaper, dado, frieze, windows and woodcarving. Covers the history of the use of the waratah in the decorative arts, at a time when the surge to Federation and nationhood led to greater appreciation of and call for the utilisation of native flora and fauna as well as indigenous materials - wood in particular - instead of those imposed and imported from the Old World. From its first discovery the waratah quickly became popular as a symbol of all that was different and exotic in the new colonies - "the land of the Waratah", particularly in New South Wales althought it is a native of three states. Perhaps one reason for its popularity is the ease with which it can be stylised into an infinite variety of ornamental treatment, much as the Egyptians with the Lotus flower and the Greeks with the Acanthus leaf. One artist who very quickly recognised the waratah's decorative potential was the Frenchman Lucien Henry, who was the principal art instructor at the Sydney Technical College between 1883 and 1891. He himself published a work on the waratah, Australian Legend. The War-atah on his return to Paris in 1891. Henry also produced a manuscript entitled The Application of Australian Flora and Fauna to Decorative Art. In 2001, a major exhibition at the Powerhouse Museum in Sydney exhibited this manuscript and explored its significance, though Henry had been unable to find a publisher in either London or Paris during his lifetime.]. Bound in original decorated cloth, gilt, patterned endpapers, 190 mm x 250 mm, 29 colour and 39 black & white illustrations; a very good copy.

Incorrect book/not as described/damaged: You are eligible for a full refund of the purchase price, including original shipping costs, if your return is a result of an error on the part of Rare Illustrated Books. If we agree, you will receive return shipping too. To receive a refund, you must return your item directly to Rare Illustrated Books within 14 days of the estimated delivery date and in the same condition as you received it.

Book did not arrive: You are eligible for a full refund of the purchase price including shipping costs if your book has not arrived 30 days past the estimated delivery date. If Rare Illustrated Books provides tracking information indicating the book has arrived, the return is void. In cases where the book is returned to Rare Illustrated Books for any of the following reasons, the refund price includes book price only: incomplete address provided by customer, unclaimed, returned to sender, or similar.

Change of mind: For the majority of our books, we are happy to accept returns if you have changed your mind. However, some books cannot be returned for this reason. We recommend contacting Rare Illustrated Books directly before initiating any returns, otherwise the return may be cancelled. Please do not ship the book until you have received confirmation from Rare Illustrated Books to do so. If we accept your request, you will be refunded the price of the book (not including original or return shipping charges).

We specialise in rare books and pride ourselves on finding interesting material in beautiful condition to offer for sale. Our stock includes gift books and unusual items for the true collector.

Cloth
"Cloth-bound" generally refers to a hardcover book with cloth covering the outside of the book covers. The cloth is stretched...[more]
New
A new book is a book previously not circulated to a buyer. Although a new book is typically free of any faults or defects,...[more]
gilt
The decorative application of gold or gold coloring to a portion of a book on the spine, edges of the text block, or an inlay in...[more]

The Civil Rights Movement of the 1960's and '70's was an explosive time in American history, and it inspired explosive literature. From Malcolm X to Martin Luther King, Jr., browse some of the most collectible books from and about that era.