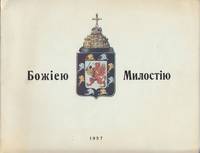 [Paris]: 1957. Oblong quarto (22 × 28). Original pictorial wrappers, illustrated with the imperial heraldry of the Romanov family; 129, [3] leaves, most featuring black and white photoreproductions with Russian captions, printed on coated paper stock throughout. Scarce album of 121 black and white photographs, depicting members of the royal family in the late 19th and early 20th century. The photographs depict individual members as well as scenes of the extended imperial family both during the Russian empire and later in the centers of the Russian émigré community. Many representatives of the Romanov family are seen in rare images from the exile. The book also features a meticulously drawn genealogical map of the Romanov dynasty. KVK, OCLC shows fourteen copies; scarce in the trade.

quarto
The term quarto is used to describe a page or book size. A printed sheet is made with four pages of text on each side, and the...[more]
leaves
Very generally, "leaves" refers to the pages of a book, as in the common phrase, "loose-leaf pages." A leaf is a single sheet...[more]
wrappers
The paper covering on the outside of a paperback.  Also see the entry for pictorial wraps, color illustrated coverings for...[more]