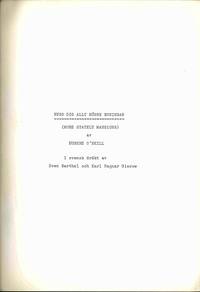 [ Stockholm: Royal Dramatic Theatre, 1962. Cloth backed boards, printed and manuscript labels. Quarto. 192 leaves, mimeographed on rectos only. Corners bumped, slight sunning at edges, otherwise fine. Mimeographed playscript of the highly important Swedish translation, from the unpublished manuscript, by Karl Ragnar Gierow and Sven Barthel. The history of this translation is fundamental to the history of the text eventually published in English by Yale University Press in 1964, and is discussed by Donald Gallup on pp. 291-5 of PIGEONS ON THE GRANITE (New Haven 1988). In summary, O'Neill had left the play unfinished, and specified that the script was to be destroyed in the event of his death, but a revised typescript had been deposited inadvertently with other papers in the Beinecke Library in 1951. In 1957, Carlotta O'Neill apprised Gierow, who had staged a successful Swedish adaptation of LONG DAY'S JOURNEY..., of its existence, and he undertook the task of an edited, translated adaptation which, although featuring excisions, remained true to what remained of O'Neill's text. When the play was produced in November of 1962, the consensus was that the play merited publication in English, and the establishment of the English text was undertaken by Donald Gallup by collating the original typescript, the Swedish translation, and the Swedish adaptation for the stage. The text here present would appear to be that of the verbatim Swedish translation by Barthel and Girow, as it includes O'Neill's descriptions of characters and sets, as well as the three scene format of Act One (which had been compressed in the adaptation). However, the epilogue, which was not included in the Swedish adaptation, does not appear to be included here. There are a few manuscript corrections or insertions in an unknown hand scattered throughout, several amounting to the addition of a line or two. A highly important script of significance transcending that of most simple translations.

All material is shipped subject to approval, but notification of return must be made within ten days and returns made in a prompt and conscientious fashion. As our inventory is housed in two locations, queries about availability should be made by e-mail rather than telephone. We do not drop-ship to third parties.

Seller rating:
This seller has earned a 5 of 5 Stars rating from Biblio customers.
Biblio.com.au member since: 2006
New Haven, Connecticut
Ask Seller a Question

Since 1975, William Reese Company has served a large international clientele of collectors and private and public institutions in the acquisition of rare books and manuscripts and in collection development.

We issue frequent, and substantial, catalogues in our fields of specialization.

fine
A book in fine condition exhibits no flaws. A fine condition book closely approaches As New condition, but may lack the...[more]
quarto
The term quarto is used to describe a page or book size. A printed sheet is made with four pages of text on each side, and the...[more]
leaves
Very generally, "leaves" refers to the pages of a book, as in the common phrase, "loose-leaf pages." A leaf is a single sheet...[more]
edges
The collective of the top, fore and bottom edges of the text block of the book, being that part of the edges of the pages of a...[more]
Cloth
"Cloth-bound" generally refers to a hardcover book with cloth covering the outside of the book covers. The cloth is stretched...[more]

Interested in rare and collectible books? Booksellers from around the world showcase some of their finest in Biblio's rare book room.

Why settle for an ordinary copy of your favorite book when you could have an autographed copy? Find signed books here.