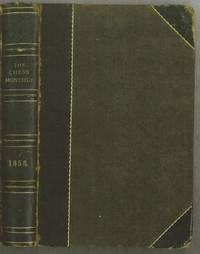 Fiske's Chess Monthly, launched when he was just twenty five years of age, was an outstanding periodical when first published between 1857 and 1861, probably the best in the English language up to that time, and for a long time thereafter; (John Keeble wrote in The British Chess Magazine in November 1931, page 496, "it is safe to say that [Fiske's] magazine remains to this day the most interesting thing of the kind ever issued"), and, 160 years later, it is still an extraordinarily interesting read for chess history and literature devotees. The Problem Department by E B Cook. This was one of the first magazines published in America. It was started in 1857 and lasted until 1861. It was published at the height of Morphy's popularity and presence.

This is the second volume, for the year 1858, with Paul Morphy named as co-editor, although he had spent the second half of the year in Europe; and the whole volume is largely a tribute to Morphy with extensive reports of his exploits both at home and abroad. Of the 97 games included in this volume, the great majority are by Morphy, starting with games from the First American Chess Congress, held in New York in October and November 1857, and ending with many of his astonishing performances in England and France. There is considerable material on the the hoped for match between Staunton and Morphy, beginning on page 96 of the March 1858 issue with the following note: "Mr Staunton says that whenever a challenge is sent by America to Europe it will assuredly be accepted." The April number includes, on pages 124 to 126, the full text of the challenge to Staunton by the New Orleans Chess Club, dated 4th February 1858, with the terms of a proposed match.

James J. Barrett wrote a few chess columns in the Buffalo area. In a chess magazine beginning on page 1 of the March 1948 Chess Review: he wrote a letter of complaint about the magazine's choice of front-cover photographs. He played a substantial role in Paul Morphy The Pride and Sorrow of Chess by David Lawson (New York, 1976), and in the Acknowledgments (page vii) Lawson wrote, "I wish particularly to express gratitude for the suggestions and generous help of James J. Barrett, with special reference to the selection, preparation, and proofreading of the games."

Lacks wrapper, some occasional pencil notations else about very good, some light foxing else good.

octavo
Another of the terms referring to page or book size, octavo refers to a standard printer's sheet folded four times, producing...[more]
spine
The outer portion of a book which covers the actual binding. The spine usually faces outward when a book is placed on a shelf....[more]
gilt
The decorative application of gold or gold coloring to a portion of a book on the spine, edges of the text block, or an inlay in...[more]
New
A new book is a book previously not circulated to a buyer. Although a new book is typically free of any faults or defects,...[more]
First Edition
In book collecting, the first edition is the earliest published form of a book. A book may have more than one first edition in...[more]

Children's books are among some of the most popular themes to build a book collection on. Learn a bit more in our  Brief History of Children's Literature.