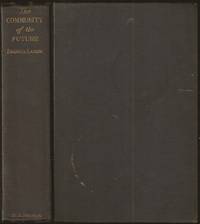 The Community of the Future

The Community of the Future

At the end of his life Lasker wrote "The Community of the Future" - a book in which he tried to put down his idea for an ideal society. Two problems were especially dear to his heart: the fate of the European Jews and the problem of unemployment. To solve the first, Lasker proposed Alaska as a possible place for immigration - a proposal that at that time did not sound as absurd as it may sound today. Lasker also thought about the origin of antisemitism and identified unemployment as one of the main reasons that made people turn against the Jews. His remedy against unemployment was the idea to erect camps modeled after the Kibbuz system in Israel to train people for the job-market.

Not only was Emanuel Laster World Chess Champion for 27 years - longer than any other player before or after him - but he also held a PhD in Mathematics, published a number of philosophical works, wrote one drama and regularly commented upon political events. In his prime Lasker was one of the most dominant champions, and he is generally regarded as one of the strongest players ever. He finally lost the title to Capablanca in 1921. Lasker demanded high fees for playing matches and tournaments, which aroused some criticism. He had seen how Steinitz's life had ended in poverty, and was determined to avoid this fate. The conditions which Lasker demanded for World Championship matches in the last ten years of his reign were controversial, and prompted attempts to define rules for championship matches. Lasker was also a talented mathematician, and his Ph.D. thesis is regarded as one of the foundations of modern algebra. He was a first-class contract bridge player and wrote about this and other games, including Go and his own invention, Lasca. Emanuel Lasker was the son of a Jewish cantor. At the age of eleven he was sent to Berlin to study mathematics, where he lived with his brother Berthold, eight years his senior, who taught him how to play chess. To supplement their income Emanuel Lasker played chess and card games for small stakes, especially at the Cafe Kaiserhof. In 1890 he finished third in Graz, then shared first prize with his brother Berthold in a tournament in Berlin. In spring 1892, he won two tournaments in London, the second and stronger of these without losing a game. At New York 1893, he won all thirteen games, one of the few times in chess history that a player has achieved a perfect score in a significant tournament. In 1892 Lasker founded the first of his chess magazines, The London Chess Fortnightly, which was published from August 15, 1892 to July 30, 1893. In the second quarter of 1893 there was a gap of ten weeks between issues, allegedly because of problems with the printer. Shortly after its last issue Lasker traveled to the USA, where he spent the next two years. The match was played in 1894, at venues in New York, Philadelphia, and Montreal. Steinitz had previously declared he would win without doubt, so it came as a shock when Lasker won the first game. Steinitz responded by winning the second, and was able to maintain the balance through the sixth. However, Lasker won all the games from the seventh to the eleventh, and Steinitz asked for a week's rest. When the match resumed, Steinitz looked in better shape and won the 13th and 14th games. Lasker struck back in the 15th and 16th, and Steinitz was unable to compensate for his losses in the middle of the match. Hence Lasker won convincingly with ten wins, five losses and four draws. Lasker thus became the second recognized World Chess Champion, and confirmed his title by beating Steinitz even more convincingly in their re-match in 1896-1897 (ten wins, five draws, and two losses).

octavo
Another of the terms referring to page or book size, octavo refers to a standard printer's sheet folded four times, producing...[more]
gilt
The decorative application of gold or gold coloring to a portion of a book on the spine, edges of the text block, or an inlay in...[more]
New
A new book is a book previously not circulated to a buyer. Although a new book is typically free of any faults or defects,...[more]
Cloth
"Cloth-bound" generally refers to a hardcover book with cloth covering the outside of the book covers. The cloth is stretched...[more]
First Edition
In book collecting, the first edition is the earliest published form of a book. A book may have more than one first edition in...[more]
spine
The outer portion of a book which covers the actual binding. The spine usually faces outward when a book is placed on a shelf....[more]