Rare books Latin American History More Rare Books from Philadelphia Rare Books & Manuscripts Co., LLC (PRB&M) A defence of the Scots settlement at Darien. With an answer to the Spanish memorial against it. And arguments to… 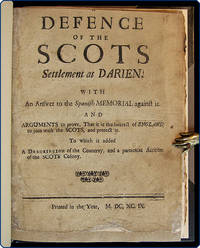 A defence of the Scots settlement at Darien. With an answer to the Spanish memorial against it. And arguments to prove that it is the interest of England to join with the Scots, and protect it. To which is added, a description of the country, and a particular account of the Scots colony.

A defence of the Scots settlement at Darien. With an answer to the Spanish memorial against it. And arguments to prove that it is the interest of England to join with the Scots, and protect it. To which is added, a description of the country, and a particular account of the Scots colony.

As the 1690s wound down the lords and and burghers of Scotland dreamed of an overseas empire such as Spain, England, Portugal, and the Dutch had, and to this end came into existence the Company of Scotland for Trading to Africa and the Indies. Chartered in 1695 and with a coffer of some £400,000, it established a colony ("Darien") on the Caribbean coast of what is now Panama, a worse location being hard to conceive. Even today that site is virtually uninhabited.
Trouble plagued the enterprise from the arrival of the first Scots in 1698 and it fairly shortly collapsed for lack of supplies, malaria, other diseases, internal dissension, a nonexistent trading base, and the might of the Spanish military in the region. The wreck of the scheme led to an economic crisis at home which in turn helped enable the 1707 Act of Unification.
The vast bulk of this work attempts to convince the English to support the Scots' enterprise and cites political, religious, social, and economic reasons for doing so; clearly, the Scots knew that English naval might in particular would be essential for the success of the scheme. Beyond this, however, a section (pp. 42 to 51) addresses the natural history, native population, agricultural commodities, and indigenous industry of the region; and the work ends with an account of the Scots' settlement, the buildings erected there, and its intercourse with the indigenous people.
Authorship of this work is problematic: It is signed "Philo-Caledon" at the end of the dedication and three other names have have been proposed as possible authors in addition to Foyer's — George Ridpath, Andrew Fletcher, and John Hamilton (2nd Baron Belhaven). Added to the conundrum of authorship, the work was produced in four editions in the same year, each having different numbers of pages, each with a different signature scheme, none with a publisher, and this one without even a place of publication!

Wing (rev. ed.) F2047; Sabin 78211; Alden & Landis 699/9; ESTC R18505 ; and Halkett & Laing II:32. 20th-century half dark brown crushed morocco with brown linen sides. This copy has all the hallmarks of having once been through a British bookseller's "hospital": all leaves are dust-soiled or age-toned; all leaves are uncut but some have been extended and others not, and some leaves with torn margins (but not all) have had lost paper restored; all such repairs and extensions are within the first six leaves, meaning these were probably supplied from another copy. Top of title-leaf trimmed with loss of "A" of the title; another leaf with a tear to the top margin with loss costing tops of several letters of words on one page, and two leaves with the running head guillotined by a binder; some stray stains. An interesting copy for its probable if problematic history and condition.

(US)
Bookseller Inventory #
34130
Title
A defence of the Scots settlement at Darien. With an answer to the Spanish memorial against it. And arguments to prove that it is the interest of England to join with the Scots, and protect it. To which is added, a description of the country, and a particular account of the Scots colony.
Author
Foyer, Archibald, supposed author
Book condition
Used
Publisher
No publisher/printer
Place of Publication
No place [Edinburgh?]
Date published
1699
Size
Small 4to (20 cm; 8"). [2] ff., 60 pp.

leaves
Very generally, "leaves" refers to the pages of a book, as in the common phrase, "loose-leaf pages." A leaf is a single sheet...[more]
morocco
Morocco is a style of leather book binding that is usually made with goatskin, as it is durable and easy to dye. (see also...[more]

Classic supernatural fiction is distinct from contemporary horror because it is more literate and often relies upon poetic subtlety rather than unpleasant gratuity to create an atmosphere. Enter if you dare!