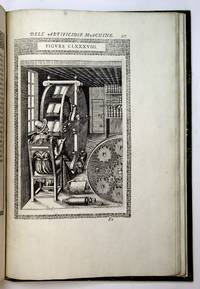 Paris: The Author, 1588. From the Collection of Arthur & Charlotte Vershbow. Folio (375 x 252 mm). Text in French and Italian, in roman and italic types respectively. Engraved title within architectural frame, engraved portrait of the author on verso of title, title and portrait by Léonard Gaultier, 194 engravings, of which 174 full-page and 20 double-page [numbered to 195, numbers 148-149 a single double-page plate], three signed with the monogram "JG", text and engravings printed within borders of typographic floral ornaments, 4-line historiated and 2-line floriated initials, woodcut tail-pieces and corner ornaments. Green-stained vellum over boards. Title and a few leaves repaired (including: d4, l1, z2, B2, C7, D1. M1, X2 and Kk1-2), L3 with hole affecting text and image. Provenance: purchased from George Staack, 1963. FIRST EDITION of this foundational work in the histories of technology and book design. Ramelli explains in his preface that the extravagance of the book was meant as much to foil a crudely pirated publication of some of his designs (probably in the circa 1583 Timon of Ambroise Bachot, future ingénieur du roi), as to fulfill his desire to show gratitude to his patron Henri III. The work was reprinted only once, in 1620. Ramelli shows "the unlimited possibilities of machines. For example, the dozens of water-powered pumps and mills shown in his treatise clearly demonstrated that non-muscular power could be substituted for horse- or human-power in any mechanical task requiring continuous or repetitive application of force, and the portrayal of over twenty types of water pump ... destroyed the notion that there were necessary limits to the configuration or arrangement of a machine" (Norman). Most notable among the engravings is the famous "reading wheel" - an innovative device to facilitate handling of multiple books. About half of the engravings depict hydraulic devices, the rest show military machines as well as fountains, bridges, cranes, foundry equipment, etc. The images proved highly influential, and were copied in a number of technical books during the next two centuries. Adams R-52; Brunet IV:1095; Dibner Heralds of Science 173; Harvard/Mortimer French 452; Norman 1777; Riccardi I:341.

leaves
Very generally, "leaves" refers to the pages of a book, as in the common phrase, "loose-leaf pages." A leaf is a single sheet...[more]
device
Especially for older books, a printer's device refers to an identifying mark, also sometimes called a printer's mark, on the...[more]
vellum
Vellum is a sheet of specialty prepared skin of lamb, calf, or goat kid used for binding a book or for printing and writing. ...[more]
verso
The page bound on the left side of a book, opposite to the recto page.
First Edition
In book collecting, the first edition is the earliest published form of a book. A book may have more than one first edition in...[more]
folio
A folio usually indicates a large book size of 15" in height or larger when used in the context of a book description....[more]