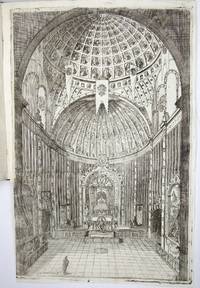 widow of Nicolas Rodriguez, 1672. From the Collection of Arthur & Charlotte Vershbow. Folio (292 x 205 mm). Etched frontispiece by Mathias Arteaga after Fr. de Herrera, etched portrait of Ferdinand III by Arteaga after Murillo, portrait of Charles II of Spain by Herrera, 9 etched plates of emblematic devices by Francisco de Arteaga, Lucas Valdes and Luisa Morales, 9 etched folding views and plans of and in the church at Seville by the Arteagas and Juan de Valdes Leal. 18th-century Spanish mottled calf. A few small scuffs to binding; six folding plates with old repairs to tears crossing images, a very occasional pale dampstain at end. Provenance: pale indistinct inkstamp on title; purchased from Paul and Marianne Gourary, 1964. FIRST EDITION: "the best illustrated Iberian book, by all odds, contained in the Harvard Collection" (Hofer). Celebrating Ferdinand III's (1199-1252) canonization by Pope Clement X, the work was commissioned by the Cathedral of Seville, and the text written by the poet, chronicler and translator Fernando de la Torre Farfán. Illustrating his text and documenting the elaborate festivities were the best Seville artists of the age. The 1671 procession followed the Corpus Christi model, with bell-ringing, fireworks, and lavish street adornment. "The volume is interesting not only as a curious piece of local history, but as being illustrated wholly by artists of Seville. The Triunfo and the other decorations, in the heavy overloaded style of the day, were designed and executed under the direction of the painter, Juan de Valdés Leal (1630-1690), and the sculptor, Bernardo Simon de Pineda, the former himself engraving two of the plates" (William Stirling Maxwell). See Eleanor Garvey "Francisco Herrera the younger: A drawing for a Spanish festival book" in: Harvard Library Bulletin, 1978, p. 28ff. Hofer 86; Palau 335597; Praz, p. 94; Vinet 815.

folio
A folio usually indicates a large book size of 15" in height or larger when used in the context of a book description....[more]
calf
Calf or calf hide is a common form of leather binding.  Calf binding is naturally a light brown but there are ways to treat...[more]