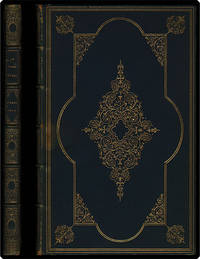 Nogaret (1740–1831) was perhaps more noted as France's theatrical censor or as the Freemason responsible for various Masonic hymns than as an author — with one exception, that being his story about an automaton created by a man named Frankenstein, predating Shelley's by almost 30 years. In the present collection (originally published in 1780), he gathers some of his own poems, short stories, and literary essays, including "La Main Chaude," "Délire bachique," and "Bouquet à Jean" along with pieces by other contemporary hands. This is => one of only 30 copies printed on papier de Chine, this example with an extra suite of plates bound in offering a second state of the frontispiece and the eleven headpiece engravings by Duplessis-Bertaux.
Binding: Contemporary signed blue morocco, covers framed in gilt triple fillets with gilt-stamped arabesque central medallion surrounded by a frame of gilt double fillets with gilt-stamped corner fleurons, spine gilt extra, with gilt dentelles and marbled paper pastedowns; lower edge of front dentelle stamped "Allô" (Paul Charles Allô, 1823–90). All edges gilt. Original slim, tricolor silk bookmarker laid in.

sunned
Damage done to a book cover or dust jacket caused by exposure to direct sunlight.  Very strong fluorescent light can cause...[more]
marbled paper
Decorative colored paper that imitates marble with a veined, mottled, or swirling pattern. Commonly used as the end papers or...[more]
bookplate
Highly sought after by some collectors, a book plate is an inscribed or decorative device that identifies the owner, or former...[more]
morocco
Morocco is a style of leather book binding that is usually made with goatskin, as it is durable and easy to dye. (see also...[more]
second state
used in book collecting to refer to a first edition, but after some change has been made in the printing, such as a correction,...[more]
spine
The outer portion of a book which covers the actual binding. The spine usually faces outward when a book is placed on a shelf....[more]
dentelle
Borders on the inner edge of a book with a lacy pattern, most often gilt.  Popular in France during the 18th century...[more]
hinge
The portion of the book closest to the spine that allows the book to be opened and closed.
gilt
The decorative application of gold or gold coloring to a portion of a book on the spine, edges of the text block, or an inlay in...[more]
edges
The collective of the top, fore and bottom edges of the text block of the book, being that part of the edges of the pages of a...[more]

Classic supernatural fiction is distinct from contemporary horror because it is more literate and often relies upon poetic subtlety rather than unpleasant gratuity to create an atmosphere. Enter if you dare!