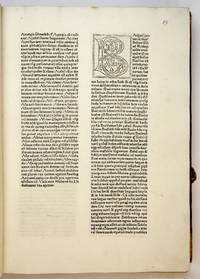 [Augsburg: Monastery of SS. Ulrich and Afra, circa 1474]. From the Collection of Arthur & Charlotte Vershbow. Royal folio (402 x 268 mm). 287 leaves (of 288, lacking first blank). 55 lines, double-column. Roman type. 12-line woodcut white-vine capitals; spaces for 2-line initials and for one 13-line initial. Printed paragraph marks. Leaves 2/5 and 2/6 disjunct as usual (one or the other a cancel), the stubs preserved. 17th-century German half pigskin, mottled paper boards. Early repair in lower margin of first leaf and old slip mounted over early ownership inscription in upper margin, pale stain in the first 20 leaves and on 28/6, small stains on fore-margin from fol. 139 to end, small mostly marginal wormholes in last thirty leaves touching a few letters, generally very crisp and fresh. Provenance: monastic armorial bookplate of an abbot with initials B.A.Z.W; Geh. Justiz-Rath Gottlieb August Friedrich Barnheim, of Insterburg, East Prussia (name in ink on first text leaf); George and David Wolfe Bruce (bookplate; donated to the Grolier Club in 1894 and sold 15 November 1968); purchased from Goodspeed's Book Shop, 1969. FIRST AND ONLY 15TH-CENTURY EDITION, utilizing for the first time an unusual set of Romanesque woodcut capitals, thought to have been based on the St. Gall manuscript used as the copy-text for this edition (see BMC II, p.338). The blocks were later acquired by Ludwig Hohenwang and thereafter by Johann Bämler. This short-lived press stood at the Benedictine monastery of SS. Ulrich and Afra in Augsburg, an important center of manuscript production in the early 15th century. Its abbot Melchior von Stainhaim in 1472 established a monastic press intended for the use of the monks; it ceased operation shortly after his death in January 1474. Anton Sorg worked at the press prior to establishing his own in 1475. Based principally on the Liber glossarum and the Abavus maior, this compendium of Latin glossaries in two sequential alphabets was widely copied from the 12th century onwards in southern German-speaking regions. The text was already misattributed in the 12th century to the 9th-century Bishop of Constance and Abbot of St. Gall. The earliest manuscript cites Salomon as the initiator of the work, not its author (Verfasserlexikon 2, 10:542-3). HC 14134*; BMC II, 340 (IC. 5767-8); CIBN S-52; GW M39747; Harvard/Walsh 554; Curt Bühler, "Remarks on the Printing of the Augsburg edition (c. 1474) of Bishop Salomon's Glossae," in Homage to a Bookman: Essays on Manuscripts, Books and Printing, written for H. P. Kraus (Berlin, 1967), 133-35; Goff S-21.

crisp
A term often used to indicate a book's new-like condition. Indicates that the hinges are not loosened. A book described as crisp...[more]
leaves
Very generally, "leaves" refers to the pages of a book, as in the common phrase, "loose-leaf pages." A leaf is a single sheet...[more]
bookplate
Highly sought after by some collectors, a book plate is an inscribed or decorative device that identifies the owner, or former...[more]
folio
A folio usually indicates a large book size of 15" in height or larger when used in the context of a book description....[more]