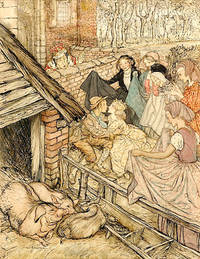 Just as the swineherd was taking the eighty-sixth kiss"

Just as the swineherd was taking the eighty-sixth kiss"

This highly detailed pen-and-ink and watercolor drawing depicts the swineherd, "that is to say, the Prince (but, of course, they did not know that he was not a real swineherd)," and the Princess sitting just outside the pigsty, kissing, with three pigs in the pigsty at lower left, five maids of honor standing around them at right counting the kisses, and the Emperor watching them from behind a brick fence.

"Now well into his sixties, Rackham was in any case gradually moving away from the vitalized energetic gothic vision of the world, and an imaginative richness, one might even say a lyrical tone was entering his work. With the distinct mellowing and spiritualization of vision which comes with age, there was an urge to find an eternal mellowing of style. Yet it appears from some of the drawings and paintings of the early thirties that Rackham was aware of the public's reluctance to accept this change; they wanted the old Rackham, the one who would give them fairies, monsters, dragons, gnomes and living trees..." (Gettings, Arthur Rackham, p. 154).

"The Observer invited Hugh Walpole to chose the best picture-book of 1932. 'I give the prize without hesitation to Rackham's Hans Andersen,' Walpole replied. 'He has risen nobly to his subject. He has acquired a new tenderness and grace. His fantasy is stronger than ever.' Twenty-five years after its publication, the Hans Andersen had become one of the most difficult of Rackham's books to buy second-hand" (Hudson, Arthur Athur Rackham His Life and Work, p. 133-34).

We will extend to you a 48-hour approval period on all items that are purchased sight unseen. If you are not completely satisfied with the item simply contact us within 48 hours after receipt, and then return it in the same condition you received it for a full refund, less freight charges, or any related costs including credit card transactions, taxes, and duties levied, especially when returning from other countries.

Seller rating:
This seller has earned a 5 of 5 Stars rating from Biblio customers.
Biblio.com.au member since: 2007
Calabasas, California
Ask Seller a Question

plate
Full page illustration or photograph. Plates are printed separately from the text of the book, and bound in at production. I.e.,...[more]
New
A new book is a book previously not circulated to a buyer. Although a new book is typically free of any faults or defects,...[more]