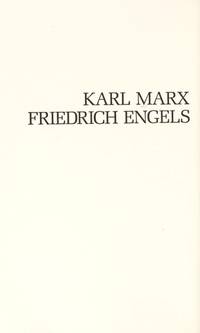 Boston. 1980. Little Brown. 1st of This Particular Edition. Bookstore Stamp Near Top Corner Of Front Free Endpaper,Otherwise Very Good in Slightly Worn Dustjacket. 0316732117. Translated from the German by Ewald Osers. 194 pages. hardcover. Jacket design by Steve Snider. FROM THE PUBLISHER - For the first time, a selection of the famous correspondence between Karl Marx and Friedrich Engels is now available in one lively and revealing volume. Judiciously edited by Fritz Raddatz to emphasize the more personal correspondence, these are letters Marx and Engels wrote to each other between October 1844 and July 1877, while living and working as exiles in London and Manchester respectively. As Raddatz points out, the letters divulge fascinating details of their forty-year friendship, such as ‘Marx’s incessant financial difficulties which gave rise to his almost peremptory demands to Engels - who supported him throughout his life - to send him money’ There is family and emigré gossip, talk of domestic troubles and political intrigue, of love affairs and adulterous liaisons, Engels, after all, lived for a time with two unmarried women, much to the chagrin of Marx’s very decorous wife. Among the many, more public, events, and ideas covered in the letters are interesting observations on the rise of Napoleon III in France, and Marx’s criticisms of the French working class. There is argument about their practical political activities, and about the ways to establish socialist and communist groups and workers’ organizations. Conspicuously, Engels is seen pressing Marx to complete his masterwork, DAS KAPITAL, on the grounds that only through a major piece of published theory would he be taken seriously as a political man, Typically, we see Marx replying with a thousand excuses, delaying and delaying as he would for almost twenty years, though it must be said that the agony of his home life was heart- rending and very real. ‘I do not believe that ‘money’ has ever been written about amidst such a shortage of money’ he despairs. inventory #8514 ISBN: 0316732117.

All items subject to prior sale. Payment in U.S. dollars must accompany order. Payment methods accepted- Paypal or check. Any item may be returned for whatever reason within 10 days of receipt. California residents add 9.5 % sales tax. California dealers please include resale card and number in lieu of tax.

Seller rating:
This seller has earned a 4 of 5 Stars rating from Biblio customers.
Biblio.com.au member since 2004
San Francisco, California
Ask Seller a Question

Zenosbooks.com is a secondhand and out-of-print Internet bookstore. While our stock is general, we specialize in Literature, Mysteries, Latin American Literature, African-American interest, and Translated Literature.

jacket
Sometimes used as another term for dust jacket, a protective and often decorative wrapper, usually made of paper which wraps... [more]