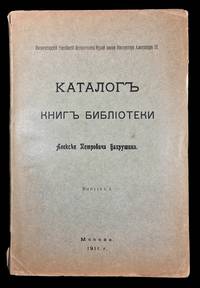 Moscow: Imperatorskii Rossiiskii Istoricheskii Muzei imeni Imperatora Aleksandra III; Tipo-Lit. Torgovogo doma Korkin, Veideman i Ko, 1911-1912. Quartos (26.8 Ã— 18 cm). Original printed wrappers; [4], 1-190, 191-382, 383-597, [1], and [1], 1-77, [2] pp. Three photogravure plates, two with protective tissue guards. Occasional light wear to spine extremities; bookstore marks partially erased to rear wrappers; very good copies. Complete catalog, in four volumes, of the collection built by the Moscow merchant Aleksei Bakhrushin (1853-1904) over three decades. Bakhrushin's library contained over 25.000 volumes, largely on Russian history, art, and literature, including reference works and Rossica in foreign languages, which the catalog lists alphabetically. The fourth installment adds foreign-language books collected by Bakhrushin, also mainly on topics relating to Russia, as well as on library science and art history. During Bakhrushin's life, the library was used widely by scholars and fellow collectors, as documented by his guestbook, which contains entries by Pavel Efremov, Ivan Zabelin, D. V. Ul'ianinskii and many others. In 1904, after his death, the collection was bequeathed to the Russian Historical Museum located just off Red Square in Moscow, along with Bakhrushin's extensive holdings in paintings, decorative arts, antiques, posters, and other printed ephemera. In 1938, the greater part of the books was transferred to the State Public Historical Library. The publication of the catalogs was financed by the collector's widow, Anna S. Bakhrushina. With three photogravures showing Bakhrushin and the collection at his home in Vorontsovo Pole, Moscow (vol. I) and a frontis showing the new Bakhrushin room at the Historical Museum, which housed the collection after his death.

spine
The outer portion of a book which covers the actual binding. The spine usually faces outward when a book is placed on a shelf....[more]
A.N.
The book is pristine and free of any defects, in the same condition as ...[more]
New
A new book is a book previously not circulated to a buyer. Although a new book is typically free of any faults or defects,...[more]

Storing books - laying down or standing up?

Don't unwittingly damage your growing book collection! Learn about when to store books laying down vs standing up. Read More

How to tell if a signature is genuine

Author's signatures can undoubtedly increase the value of a rare book or first edition. The more scarce the book is, the more an autograph adds to its value. But how to tell if the signature is real? Find out how you can avoid common pitfalls in identifying an author's signature.