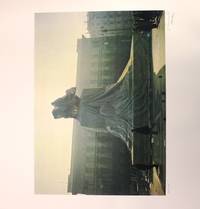 Leather suitcase containing 12 signed and numbered original artworks by leading members of the "New Realist" or "Nouveau Réalisme" movement, comprising 10 prints, 1 sculpture, and 1 two-piece Plexiglas work, with accompanying introductory fascicule featuring text in French, German, English, and Italian signed by editor Attilio Codognato, each of the prints and the text booklet housed in their own envelopes. Some occasional scuffing, some envelopes with slight toning or small tears, overall excellent. Envelope sizes approx. 19-3/4 x 19-3/4 inches, suitcase 22-1/2 x 20-3/4 x 5-1/2 inches. Housed in original leather suitcase with carrying handle and 2 clasps, leather slightly worn, some rubbing and scratching. n.p. (Milan) (Ars Viva) n.d. (1973) Number 242 of a limited edition of 600 numbered copies. It is unclear how many cases were actually filled, but the number is likely below 600. An unusual and highly desirable collection of original works of contemporary art from the important Nouveau Réalisme movement, an artistic movement founded in 1960 by Pierre Restany and Yves Klein during their first collective exposition held at the Apollinaire Gallery in Milan. New realism was one of many avant-garde artistic groups active in the 1960's, alongside such other groups as Fluxus and American pop art. They were based mostly in France, and are associated with the École de Nice movement. The new realists described themselves as using "new ways of perceiving the real".
Restany authored the group's original manifesto in the spring of 1960, which was titled "Constitutive Declaration of New Realism" and was originally signed by Klein, Arman, Martial Raysse, Restany, Daniel Spoerri, Jean Tinguely, François Dufrêne, Raymond Hains, and Jacques de la Villeglé. In 1961 César, Mimmo Rotella, Niki de Saint Phalle, and Gérard Deschamps added their signatures to a second manifesto, titled "40° above Dada".
The group's first exhibition as a movement took place in November 1960 at the Paris "Festival d'avant-garde", and was followed by several others. Their last collective show took place in 1963; after the death of Yves Klein in June 1962, the group had difficulty maintaining cohesion, and it disbanded entirely by 1970.
The artists whose work is included in this collection are: Christo (offset print); Pierre Restany (color serigraph); Raymond Hains (offset print); Niki de Saint Phalle (offset print); Jacques de laVilleglé (collage); Gerard Deschamps (mirror object); Arman (serigraph on Plexiglas); Daniel Spoerri (folding pop-up table setting); Mimmo Rotella (offset print); François Dufrêne (offset print); and César (sculpture of a human finger).

rubbing
Abrasion or wear to the surface. Usually used in reference to a book's boards or dust-jacket.
New
A new book is a book previously not circulated to a buyer. Although a new book is typically free of any faults or defects,...[more]

Read through our tips, hints, and information on collecting books signed or inscribed by the author or illustrator.