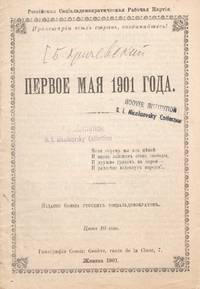 Geneva: Izdanie soiuza russkikh sotsial'demokratov, 1901. Octavo (15.5 × 10.5 cm). Original printed staple-stitched self-wrappers; 24 pp. Duplicate stamp of Hoover Institution to front wrapper. Light soil to rear wrappers; else very good. An early May Day brochure, which captures the development of the May 1st holiday in pre-revolutionary Russia. Most likely authored by Boris Krichevskii (1866-1919), the pamphlet provides a brief history of the worker's movement, the May Day events in Chicago in 1886, and the inception of the holiday. It was issued by the Russian Social-Democratic Labor Party (RSDRP), which was founded in 1891 to unite the diverse movements struggling for workers' liberation in Russia and abroad. The party eventually split into the Menshevik and Bolshevik factions (with Vladimir Lenin on the side of the Bolsheviks and Aleksandr Martynov on the side of the Mensheviks), and was dissolved after the October Revolution.<br/><br/>The decision to hold annual demonstrations on May 1 was made in July 1889 at the 2nd International Congress in Paris. The demonstrations were to commemorate the Chicago workers who organized a march on May 1, 1886 demanding an 8-hour work day - an event which ended in a bloody clash with the police. In 1890 the first international May Day celebrations took place in Austria-Hungary, Belgium, Germany, Denmark, Spain, Italy, USA, Norway, France and Sweden among others. In 1901 Russian workers took part in the international celebrations for the first time, with the 1901 brochure printed to disseminate the information about the holiday among the workers. Only a year later, the 1902 brochure takes the knowledge of the holiday for granted and calls for specific changes not only in working conditions but in the entire system of government, demanding the creation of local indpenedent governing bodies, the freedom of speech and press, freedom to gather, as well as the right to form unions and to strike. By 1914, nearly half a million Russian workers would gather for May Day strikes. The day was made an official holiday after the October 1917 Revolution and would remain the biggest Soviet holiday until 1991. <br/><br/>With the stamp and duplicate stamp of the "B. I. Nicolaevsky Collection" to front wrapper and title page. Boris Nicolaevsky (1887-1966) was a Russian revolutionary (Menshevik) who lived in emigration starting in 1922. He amassed an important collection on the history of the revolutionary movement in Russia and sold the collection to the Hoover institution in 1963. KVK, OCLC show copies at Michigan, Yale, Hoover, Harvard, Indiana, Chicago, LSE, Geneva, National Library of Israel.

octavo
Another of the terms referring to page or book size, octavo refers to a standard printer's sheet folded four times, producing...[more]
title page
A page at the front of a book which may contain the title of the book, any subtitles, the authors, contributors, editors, the...[more]

The Importance of Dust Jackets

Is the dust jacket of a book worth holding on to? Consider its form, its function, and its beauty. Learn more about dust jackets and their importance to your collection.