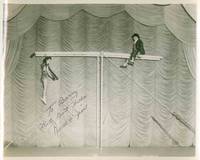 Collection of original photographs and related ephemera chronicling the vaudeville and circus career of "The Darings" and, later, "Jim Daring's Chimps", comprised of 77 original photographs, 8 photo postcards, and 6 additional pieces of assorted ephemera including flyers for the RKO Palace in New York and the former Rocky Point Park in Rhode Island; with approximately half of the photographs being mostly professional 8"x10" photographs and half smaller-format (5"x7" or smaller), a number being amateur and candid snapshots of circus scenes and performers, including a handful signed by Renee and/or Jim Daring, and several inscribed to the Darings from fellow performers. About half of the photographs are captioned to verso in pencil, with notes providing further information and context. Uniformly well-preserved, images generally fresh and unfaded, some with mild edge-creasing, minor rubbing to corners, or slight soiling. Housed in two modern photograph albums. N.p., n.d. (circa 1940-1955). "The Darings" (aka Edith and Joseph Gieringer) began as a daredevil act in the late 1930s, and by the mid-1940s had switched their act to running a successful troupe of performing chimpanzees, following the death of several of their high-wire colleagues. With their new act, "Jim Daring's Chimps", they appeared on nationally-televised broadcasts such as The Arthur Godfrey and Gary Moore Shows. The majority of this collection chronicles the Darings' career in vaudeville and then later with the chimpanzees, while a number of photographs and postcards document other contemporary vaudeville and circus performers who operated within the Darings' circle. Many of these are professional promotional photographs, with several signed to the Darings. Some of the other performers depicted include Miss Luxem, the Stratosphere Girl; Texas Tommy and Baby Doll; the Billetti Troupe; Burt Northrup & Bess; Lillie Greenwood; La Flottes 'Rhapsody on Wheels'; the circus clown Polidor; Aquarena; and others. A fascinating and delightful archive from the worlds of vaudeville and the circus.

New
A new book is a book previously not circulated to a buyer. Although a new book is typically free of any faults or defects,...[more]
inscribed
When a book is described as being inscribed, it indicates that a short note written by the author or a previous owner has...[more]
rubbing
Abrasion or wear to the surface. Usually used in reference to a book's boards or dust-jacket.
verso
The page bound on the left side of a book, opposite to the recto page.

Collecting History of the Circus in America

Step right up! Take a look at the center ring, where you will see displayed the most amazing, most colorful series of history books that the world has ever seen! Right this way, folks...

Bob Dylan - 2016 Winner of the Nobel Prize for Literature

From the first screech of his electric guitar upsetting musicians at a folk festival to his writing and paintings, Bob Dylan has risen to become a seminal force in American popular culture. In 2016, he was recognized by the Nobel Committee. Learn more about his creations...

Yes, we have a new look!

Questions, comments, suggestions? We want to hear from you!

Tell us what you think!