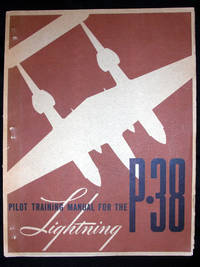 Washington D. C. Headquarters-U.S. Army Air Forces. 1944. Punch and clipbound in stylized titled coloured pictorial wrappers. Thin 4to. Classified "Restricted" and marked as such on each page. The December 1944, Original "Brown Cover" issue. Profusely illustrated with photographs, drawings, maps, diagrams, charts, etc. During its time, the Lockheed P-38 Lightning was considered the most sophisticated aircraft Lockheed had ever built. In February 1937, the U.S. Army Air Corps released Specification X-608, a daunting requirement that called for speed, range, and climb capabilities impossible to achieve at that time with a single-engine aircraft. In Burbank, California, a Lockheed design team led by Hall Hibbard, and assisted by a young engineer named Clarence "Kelly" Johnson, immediately began a series of designs that would culminate in the contract-winning XP-38. Jim Gerschler became project engineer on the aircraft.The XP-38 (it was many months before it was called the Lightning) was of an extraordinarily advanced conception, an all-metal, midwing monoplane with twin Allison engines using General Electric turbo-superchargers, a central nacelle for the pilot and armament, contra-rotating propellers, twin-booms and rudders, and a tricycle landing gear.Nothing like it had ever been seen before, and it would be the only single-seat, twin-engine aircraft to reach mass production status during World War II. The distinctive sight and sound of the Lockheed P-38 Lightning would make it one of the best-known aircraft of the war.First flown on January 27, 1939, by one of its staunchest advocates, Air Corps 1st Lieutenant Ben Kelsey, the prototype XP-38 made national headlines when it crashed on a transcontinental record-setting attempt. Nevertheless, imminent war in Europe accentuated the need for the Lockheed P-38 Lightning, and production orders began to flow in. By war's end, a total of 10,037 P-38s had been built. As it was much more modern than the Curtiss P-40, there was a great demand in every theater of war for the twin-engine fighter.The big Lockheed P-38 Lightning had its greatest successes in the Pacific Theater, where the two leading aces, Majors Richard I. Bong and Thomas B. McGuire, scored 40 and 38 victories, respectively, using only the Lightning. The Lightning was also the only plane capable of carrying out the extraordinary 800-mile mission that climaxed with the shoot-down of the Mitsubishi "Betty" carrying Admiral Isoroku Yamamoto on April 18, 1943.Not as maneuverable as the Japanese fighters, the Lockheed P-38 Lightnings used dive and zoom tactics and their formidable center-line firepower of four .50-inch machine guns and a single 20-mm cannon to gain victories. It gave its pilots confidence on the daily long-distance flights over water, for if one engine was lost to combat or accident, the Lightning was able to limp home on the other.The Lockheed P-38 Lightning was less at home in Europe, where its large size made it less maneuverable than the German fighters it faced. Further, its Allison engines didn't operate as well at the high altitudes and cold temperatures of the European Theater. It became a workhorse nonetheless, doing duty in bomber escort, reconnaissance, and bombing, carrying as much as 4000 pounds of bombs in the latter role. One version of the P-38 was modified with a "droop-snoot" and carried a bombardier and either a Norden bombsight or a radar set.About 1,400 Lockheed P-38 Lightnings were completed as F-4 and F-5 reconnaissance planes, which were flown, unarmed and unafraid, deep within enemy territory. There were more Lightning reconnaissance planes than any other type in the USAAF.The Lockheed P-38 Lightning set many records. It was the only USAAF fighter to be in production prior to the start of the war and still in production on VJ-Day, August 15, 1945. It was the first fighter with sufficient range to make ferry flights across the Atlantic. It was also the first fighter for which compressibility problems were forecast, and among the first to experience compressibility. The P-38 was the first fighter to use power-boosted flight controls as well as the first to have a tricycle landing gear.Curiously, Lockheed did not have much luck in creating advanced versions of the Lightning. The more powerful XP-49 and XP-58 took too long to mature, and neither was successful. It really didn't matter, for the Lockheed P-38 Lightning was capable of doing all that was required of it. -The Editors of Publications International, Ltd. Several small splits to spine. Several tiny chips/creases to to fore-edge of front cover. Very mild Usual mild wear from metal binding pins to front and rear inside covers. A sensational, well preserved, clean copy.

The Heldfond Book Gallery is an elected member of the Antiquarian Booksellers Association of America and the International League of Antiquarian Booksellers and conforms to all ethical codes and standards of those organizations.Books found to be materially mis-described may be returned within seven days of receipt and all monies will be promptly refunded, if returned to us in the same condition as sent.

Seller rating:
This seller has earned a 5 of 5 Stars rating from Biblio customers.
Biblio.com.au member since: 2005
San Anselmo, California
Ask Seller a Question

Located just accross the Golden Gate Bridge in Marin County, California - the Heldfond Book Gallery, Ltd. is one of the oldest and most esteemed Rare Bookstores on the West Coast. Specializations include: Illustrated Books in all disciplines, Fine Bindings and Sets, Important Literary First Editions,Fine Arts, Collectable Children's Illustrated Books, Illuminated Manuscripts and Incunabula,Rare Aviation and Maritime as well as a consistently superb inventory of General Antiquarian Materials.

wrappers
The paper covering on the outside of a paperback.  Also see the entry for pictorial wraps, color illustrated coverings for...[more]
spine
The outer portion of a book which covers the actual binding. The spine usually faces outward when a book is placed on a shelf....[more]

Where can I get my book appraised?

Do you need to get an appraisal for a valuable book? This short guide from our Book Collecting Guide might help.