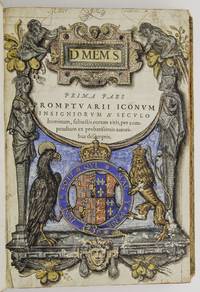 Lyons: printed for the author, 1553. From the Collection of Arthur & Charlotte Vershbow. Two parts in one volume, 4to (243 x 168 mm). First title-page illuminated in gold and colors incorporating the coat of arms of Philip II and Mary I (slightly rubbed). 828 medallion portraits, vignettes and initials equally illuminated. Ruled in red. Contemporary beige velvet. Binding worn at extremities; lacking final leaf of text qq4, title with small loss at lower corner and some flaking of pigment, some marginal worming to last few leaves. Provenance: KING PHILIP II (1527-1598) and QUEEN MARY I (1516-1558), (arms on title); Maurice Kyffin (d.1599), Welsh poet and translator, author of The Blessedness of Brytaine (1588), pupil of John Dee (signatures on title and a2 dated 1592 [cropped]); Sir Henry Palmer (circa 1623-1706), 3rd Baronet of Wingham, Kent (29 June 1703 ex dono inscription to:) John Battely (?his manuscript list of names on rear endleaf); Thomas Robinson (1738-86), 2nd Baron Grantham, British Foreign Secretary from 1782-83 (armorial bookplate); purchased from Marlborough Rare Books, 1981. FIRST EDITION IN LATIN, issued the same year in French and Italian, of Rouillé's comprehensive work of human iconography. Philip's marriage to 37-year-old Queen Mary of England was arranged by his father and took place on 25 July 1554, two days after their first meeting. Under the terms of the Act for the Marriage of Queen Mary to Philip of Spain, Philip was to enjoy Mary I's titles and honors for as long as their marriage should last. All official documents, including Acts of Parliament, were to be dated with both their names, and Parliament was to be called under the joint authority of the couple. Philip and Mary appeared on coins together, with a single crown suspended between them as a symbol of joint reign and the coat of arms of England was impaled with Philip's. Mary died without heir in 1558 before the union could revitalize the Roman Catholic Church in England and upon her death Philip lost his rights to the English throne and ceased being King of England and Ireland. The medallion portraits are the work of several artists, including Georges Reverdy. The early part of the series of French kings is based on the much copied set in the 1546 Epitome gestorum lviii. Regum Franciae, while the later kings are substantially different. H. Bouchot suggests that the best of the portraits were designed by Corneille de Lyon. The second part has a divisional title-page with an emblematic medallion attributed to Reverdy and a medallion cut of the Nativity at the beginning of the text. See Harvard/Mortimer French 465 (edition in French). Adams P-2161.

leaves
Very generally, "leaves" refers to the pages of a book, as in the common phrase, "loose-leaf pages." A leaf is a single sheet...[more]
First Edition
In book collecting, the first edition is the earliest published form of a book. A book may have more than one first edition in...[more]