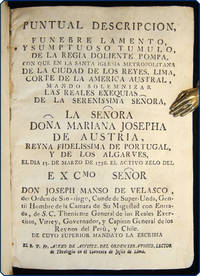 Very special ceremonies commemorated the death of a king or a queen. In Lima at the midpoint of the 18th century news arrived in the viceregal capital of the passing of Queen Maria Anna Josefa (1683–1754), consort of John V, King of Portugal. She died on 14 August and plans were immediately proposed for commemorating her life and death when the news arrived in Peru in the early months of 1755.
Poems were solicited, designs for the ceremonial cenotaph were proposed, special events were planned, a sermon-giver was selected: And this volume was printed to tell later generations about those events as they were eventually accomplished on 15 March 1756. We learn from the volume who the special dignitaries were, who said what, and what the processions and the order of the marchers were; and we are given a detailed description of the cenotaph, its ornaments, and the texts of the poems and epigrams (chiefly on pp. 80 through 237) recited. => The editor, Alvitez, was a Franciscan.
Fray Francisco Ponze de Leon, a Mercedarian, chief regent of the Royal University of San Marcos, gave the "Oracion funebre, que a la memoria de la fidelissima señora doña Mariana Josepha de Austria," which occupies the final 49 leaves here.
Fray Antonio de Contreras, another Mercedarian, engraved the likeness of the elaborate cenotaph that the viceroy had constructed for the day honoring the late queen. => The plate is large and folding.
The poems are romances, redondillas, sonnets, decimas, etc. => One poem is even an example of concrete poetry and two others are in Portuguese! (by Antonio Alberto, and Juan Julian Capetillo de la Sota, who also supplied a poem in ENGLISH). The poets include Viceroy Jose Manso de Velasco; Nicolás Sarmiento de Sotomayor y los Ríos del Campo, IV conde del Portillo; various other nobles; and one woman, Josefa Brava de Lagunas y Villela.
Provenance: 19th-century bookplate of Guillermo Miguel Irarrazabal.
The number of "splendid ceremonies" books produced in colonial Peru is small.
Searches of NUC and WoldCat find only five copies in U.S. libraries, not all of them complete with the plate. Searches of WorldCat, COPAC, CCPB, and KVK locate only 4 other copies worldwide.

Worldcat
Worldcat is a collaborative effort produced by OCLC (Online Computer Library Center) and supported and used by 72,000 libraries...[more]
vellum
Vellum is a sheet of specialty prepared skin of lamb, calf, or goat kid used for binding a book or for printing and writing. ...[more]
leaves
Very generally, "leaves" refers to the pages of a book, as in the common phrase, "loose-leaf pages." A leaf is a single sheet...[more]
bookplate
Highly sought after by some collectors, a book plate is an inscribed or decorative device that identifies the owner, or former...[more]
A.N.
The book is pristine and free of any defects, in the same condition as ...[more]
crisp
A term often used to indicate a book's new-like condition. Indicates that the hinges are not loosened. A book described as crisp...[more]
plate
Full page illustration or photograph. Plates are printed separately from the text of the book, and bound in at production. I.e.,...[more]