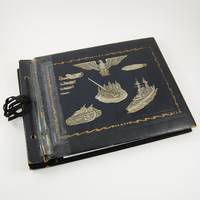 1941. Hardcover. Good. Oblong Quarto. Second World War photo album compiled by American Red Cross worker Elizabeth Ridley, with three wartime Naval yearbooks & souvenir books owned by her sister Christine, a naval air mechanic in the WAVES programme. Oblong folio (340 x 260 mm). 1941-45. Contemporary dark blue skiver elaborately embossed in grey with military motifs including an American Eagle, planes, tank, battleship, artillery, and blimp. Bound with black nylon ties that may not be original. 80 black paper pages containing 219 photographs attached with photo corners. The photos range in size, with the majority measuring 90 x 60 mm, and the largest 255 x 200 mm. A few items, including some photos, a small colour Kodachrome, several negatives, and an unused Anchor Line trunk label are loosely inserted. Elizabeth has written her name and address on the front free endpaper and annotated many of the photos with white ink. The naval books owned by Christine Ridley include We Keep 'Em Flying: A Visit to the Naval Air Technical Training Centre, Memphis Tennessee; Navy Log, a yearbook from the same centre, and Tattoo: United States Naval Air Station, Atlanta, Georgia. Loosely inserted in the Navy Log yearbook is a certificate showing that Christine passed the training to become an aviation machinist mate in October 1943. Loosely inserted in Tattoo is the certificate she received upon becoming an aviation machinist's mate second class in June 1944. Just a little rubbing and toning at the extremities, very good condition. Boards separated and reattached with cellotape, some rubbing and wear at the extremities. The leaves are brittle and exhibit cracking and chipping at the edges. Good condition. An evocative Second World War photo album and group of naval publications representing life on the American home front for Red Cross worker Elizabeth Ridley (1912-2004) and her sister Christine Ridley (b. 1920), a naval air mechanic. The sisters were originally from New Jersey, but moved throughout the US as part of their wartime work and would later settle in Washington D. C. Elizabeth's pre-war career is unknown, but after the war she continued to work for the Red Cross in Riverton, New Jersey, and in later life was employed at the Library of Congress. Christine was originally a teacher before joining the Women Accepted for Volunteer Emergency Service (WAVES - officially the Naval Women's Reserve), which began operating in 1942. Her preliminary training as a naval aviation mechanic was undertaken at the Naval Air Technical Training Center in Memphis, Tennessee, followed by advanced training for Petty Officer Second Class in Atlanta. Elizabeth's album compiles several years worth of photographs beginning in 1941, presenting a wonderful cross-section of American life during the War. The pages are filled with both formal and informal snaps of friends and family, the many individuals in military uniform evoking the War's long reach into ordinary Americans' lives. Included are numerous pictures of Elizabeth and her colleagues in their Red Cross uniforms, two large and particularly nice shots of a Red Cross office with booster posters on the walls, and an image of Red Cross workers marching in a parade. There are also numerous photos of Christine in her naval uniform, two taken outside a Naval training office. Despite the troubled times most of the images are light-hearted and depict family reunions, days out, and travel, including trips to Florida; Texas (with shots of the Alamo and one of a bomber approaching Kelly Field); Gulfport, Mississippi; the beach at Hampton Bays, New York (with a series of shots of the sisters and their friends in bathing costumes and also bicycling down a country road); the Rochester Yacht Club; Washington D.C., and other unnamed locations. Overall this collection is a deeply personal and compelling look at life for two American women participating in the mass mobilization of American society during the Second World War.

Seller rating:
This seller has earned a 5 of 5 Stars rating from Biblio customers.
Biblio.com.au member since: 2018
London, Greater London
Ask Seller a Question

We specialise in rare science books dating from the late Middle Ages to the 20th century, including first editions, signed copies, manuscripts, objects, and ephemera. We have particular expertise in natural history, genetics and evolution, anatomy, nuclear physics and the Manhattan Project, early computing, and women in science. We also carry books related to women's history and literature.

leaves
Very generally, "leaves" refers to the pages of a book, as in the common phrase, "loose-leaf pages." A leaf is a single sheet...[more]
New
A new book is a book previously not circulated to a buyer. Although a new book is typically free of any faults or defects,...[more]
edges
The collective of the top, fore and bottom edges of the text block of the book, being that part of the edges of the pages of a...[more]
chipping
A defect in which small pieces are missing from the edges; fraying or small pieces of paper missing the edge of a paperback, or...[more]
folio
A folio usually indicates a large book size of 15" in height or larger when used in the context of a book description....[more]
rubbing
Abrasion or wear to the surface. Usually used in reference to a book's boards or dust-jacket.
quarto
The term quarto is used to describe a page or book size. A printed sheet is made with four pages of text on each side, and the...[more]