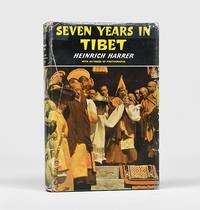 Seven Years in Tibet.: Translated by Richard Graves. [Together with:] an autograph letter signed, and related ephemera.

New York: E.P. Dutton and Company, Inc., 1954. First US edition, first printing, presentation copy inscribed twice on the frontispiece recto "To Mr. Edwards with my very best wishes, from H. Harrer [two lines of Tibetan script] Washington, Oct. 1954" and "March 1955. In the meantime I have the pleasure and privilige [sic] to call above 'Mr.' my friend 'Toppy' Heinrich". This is a great association copy.
The recipient, Walter Meayers "Toppy" Edwards (1908-1994), was a British-born picture editor, photographer, and writer for the National Geographic Society, who won the National Press Photographers Picture of the Year Award in 1969 and 1972. Edwards was a member of the Explorer's Club in New York City. He was author and photographer for seven National Geographic magazine articles and was the photographer for 11 others, on subjects that included Micronesia, Canada, and a canoe trip down the Potomac River. During the late 1920s he worked in the Paris bureau of the New York Times-Wide World Photos and for the Topical Press Agency in London. In 1930, he came to the United States and settled in Washington, where he worked for Harris & Ewing photographers before joining National Geographic. In 1937, he married Mary Woodward Worrall, the year after becoming a naturalised American citizen.
In the enclosed letter, addressed to to Mary Edwards and dated 29 January 1998, Harrer writes, "I'm sorry to hear that Toppy passed away, he was always a friend and very helpful." He also reflects on the 1997 film adaptation of his Seven Years in Tibet starring Brad Pitt: "the movie has not much to do with my character - but it is very helpful for the Tibetan cause."
The related ephemera includes:
- a silver gelatin photograph of Harrer with Sir John Hunt and Fred Rössuer at an international race in 1956, inscribed to "Toppy" Edwards, captioned, and signed "Heinrich," (99 x 143 mm)
- a blank postcard from the Heinrich Harrer Museum,
- a 14-page typescript entitled "Delight in Big Adventure: Heinrich Harrer, man and explorer," stamped "translated by Mrs Kinney, August 18, 1972"
- a leaf from The Explorers Newsletter of April-June 1992,
- a 3-page press cutting of a review of the film,
- and a small note from Mary Edwards with a reference to My Life in Forbidden Lhasa, by Harrer.
"This is the action-packed story of a young adventurer's escape from a British internment camp in India during World War II and his dramatic trek through rugged Himalayan passes to sanctuary in the Forbidden City of Lhasa" (jacket blurb). Harrer (1912-2006) was a distinguished Austrian mountaineer, part of the four-man team who made the first successful ascent of the north face of the Eiger in 1938. Seven Years in Tibet, published the preceding year in the UK and in German in 1952, was a runaway best-seller and translated into 53 languages. It gives a glimpse of the old Tibet before the Chinese invasion of 1950. Octavo. Original red quarter cloth, gilt-lettered spine, black cloth boards with gilt stamp of Lhasa to front cover. With dust jacket. Double-page monochrome pictorial title page, 45 illustrations from photographs, and double-page regional map. Corners a little rubbed, the binding otherwise sharp, internally crisp. A near-fine copy in the good only jacket, crude tape repairs to extremities, spine sunned.

Seven Years in Tibet is an autobiography written by Austrian mountaineer Heinrich Harrer based on his real life experiences in Tibet between 1944 and 1951. The story takes place during the Second World War and the interim period before the Communist Chinese People's Liberation Army moved into Tibet in 1950. It narrates the true story of an Austrian prisoner of war who successfully escaped his British captors in India in 1944 on the third attempt. His escape route led him across Tibet. In 1943, Heinrich Harrer, escaped captivity and made his way through the Himalayan passes to the Forbidden City of Lhasa in Tibet and finally lived for years in Lhasa becoming a tutor to the Dalai Lama.  Seven Years in Tibet  was first published in Germany before being acquired by Dutton.

All major credit cards are accepted. Both UK pounds and US dollars (exchange rate to be agreed) accepted. Books may be returned within 14 days of receipt for any reason, please notify first of returned goods.

Seller rating:
This seller has earned a 5 of 5 Stars rating from Biblio customers.
Biblio.com.au member since 2006
London
Ask Seller a Question

Since its establishment, Peter Harrington has specialised in sourcing, selling and buying the finest quality original first editions, signed, rare and antiquarian books, fine bindings and library sets. Peter Harrington first began selling rare books from the Chelsea Antiques Market on London's King's Road. For the past twenty years the business has been run by Pom Harrington, Peter's son.

spine
The outer portion of a book which covers the actual binding. The spine usually faces outward when a book is placed on a shelf.... [more]
sunned
Damage done to a book cover or dust jacket caused by exposure to direct sunlight. Very strong fluorescent light can cause slight... [more]
gilt
The decorative application of gold or gold coloring to a portion of a book on the spine, edges of the text block, or an inlay in... [more]
e.p.
The double leaves bound into a book at the front and rear after ... [more]
crisp
A term often used to indicate a book's new-like condition. Indicates that the hinges are not loosened. A book described as crisp... [more]
octavo
Another of the terms referring to page or book size, octavo refers to a standard printer's sheet folded four times, producing... [more]
inscribed
When a book is described as being inscribed, it indicates that a short note written by the author or a previous owner has been... [more]
Association copy
An association copy is a copy of a book which has been signed and inscribed by the author for a personal friend, colleague, or... [more]
title page
A page at the front of a book which may contain the title of the book, any subtitles, the authors, contributors, editors, the... [more]
recto
The page on the right side of a book, with the term Verso used to describe the page on the left side.
jacket
Sometimes used as another term for dust jacket, a protective and often decorative wrapper, usually made of paper which wraps... [more]