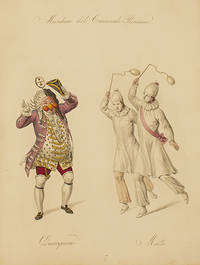 Berlin: Wittich, 1826. Berlin: Guglielmo Wittich, 1826 .Bound with Abhandlung uber die comodie aus dem stegreif un die Italianische masken... Berline: Ludwig Wilhelm Wittich , 1826. 4to, half red levant and red linen covered boards; gilt decorated spine. Joints worn; text pages and the paper of the final two plates browned. Twenty superb and colored plates of characters and scenes of the commedia dell'arte, including Pantalone, Arlecchino, Smeraldina and a male and female Pulcinella (who evolved into the Punch of English Punch and Judy shows). An important text, complete in Italian and German as called for. "Comedy of the craft of improvisation" with masked types in specific roles in travelling companies performing on outside stages with minimal props. Begun in Italy in the 16th century and popular in Germany after the publication of Goethe's Romische Carneval in 1789. This improvised acting became a professional theatrical form with an established repertoire. Women's roles were played by women, which was standard on the Italian stage.. Leather and Boards. Near Fine. 4to.

fine
A book in fine condition exhibits no flaws. A fine condition book closely approaches As New condition, but may lack the...[more]
gilt
The decorative application of gold or gold coloring to a portion of a book on the spine, edges of the text block, or an inlay in...[more]
spine
The outer portion of a book which covers the actual binding. The spine usually faces outward when a book is placed on a shelf....[more]

Are you enchanted by books clad in fine bindings? This is the gallery for you to peruse! Learn more about Bayntun, Rivière & Sons, and their combined work as Bayntun-Rivière.