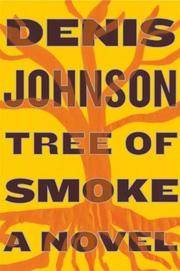 TREE OF SMOKE: A Novel

TREE OF SMOKE: A Novel

New York, New York, U.S.A.: Farrar, Straus and Giroux, 2007. 1st Edition 1st Printing. Hardcover. Mint/New. 8vo - over 7¾ - 9¾" tall. Once upon a time there was a war . . . and a young American who thought of himself as the Quiet American and the Ugly American, and who wished to be neither, who wanted instead to be the Wise American, or the Good American, but who eventually came to witness himself as the Real American and finally as simply the Fucking American. That's me." This is the story of Skip Sands-spy-in-training, engaged in Psychological Operations against the Vietcong-and the disasters that befall him thanks to his famous uncle, a war hero known in intelligence circles simply as the Colonel. This is also the story of the Houston brothers, Bill and James, young men who drift out of the Arizona desert into a war in which the line between disinformation and delusion has blurred away. In its vision of human folly, and its gritty, sympathetic portraits of men and women desperate for an end to their loneliness, whether in sex or death or by the grace of God, this is a story like nothing in our literature.Winner of the National Book Award for Fiction, TREE OF SMOKE was also nominated for the Pulitzer Prize in Fiction as Best Book.Author also of JESUS'S SON, ALREADY DEAD: A California Gothic, and TRAIN DREAMS, among others. Mint, unread, first edition, first printing, in new, mylar-protected dust jacket. (Not remainder=marked or price-clepped) *Packed carefully and shipped in a box to insure arrival in pristine condition, L162

Books shipped in secure packaging via USPS Media Mail, Priority Mail or Global Priority Mail, upon receipt of payment, unless customer requests another method of delivery. Shipping is within 24 hrs. of receipt of payment for money orders, and after three business days for personal checks. All book jackets are protected in mylar covers from Brodart. Customers have three business days within which to contact us with complaints about merchandise by e-mail. Returns must be approved, in original packaging material, and in the same condition as when shipped. Because we make every effort to have the best possible merchandise in the best condition, to describe it accurately and to package it securely, we will in most cases accept approved returns. Approved returns will be cheerfully refunded, or credit given toward other books. Our aim is to please, and to earn your return business with superior service and prompt delivery.

Seller rating:
This seller has earned a 4 of 5 Stars rating from Biblio customers.
Biblio.com.au member since 2003
Los Angeles, California
Ask Seller a Question

Modern Literature, Mysteries, and More!
We specialize in collectible, contemporary signed first editions. First edition means the first printing. (Later printings of the first edition are typically not printed on acid-free paper, and should be avoided by collectors.) Signatures are obtained by us in person. Inscribed books sold by us may contain a line, a phrase, or a sketch that the author has chosen to add. Our signed books are not dedicated to anybody in particular (not to your grandmother, your Aunt Gladys, your ex-lover or your former cellmate), except in the rare case of a presentation copy from an author to a noteworthy person. All our books are hardcover, unless the book is an Advance Reading Copy, Uncorrected Proof, or PBO. You can expect that the books we send you will be as described, and in a physical condition worthy of the author’s having signed them. We do not sell remainder-marked books, signed or otherwise

jacket
Sometimes used as another term for dust jacket, a protective and often decorative wrapper, usually made of paper which wraps... [more]
First Edition
In book collecting, the first edition is the earliest published form of a book. A book may have more than one first edition in... [more]

P. T. Barnum was not only one of the founders of modern day circus performance, he was also the author of the second most printed book of the 19th century. Learn about collecting P. T. Barnum books and ephemera here.