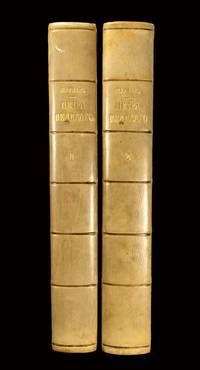 St. Petersburg: pri Imperatorskoi Akademii Nauk, 1770-1772. Small quartos (24.6 × 18.3 cm). Later polished calf with spine in six compartments and gilt titles; marbled endpapers; red edges; 460 and 438, a-e, 460 pp. (lacking pp. 461-763). Decorative initials, headpieces, and etched allegorical vignette with a small portrait of Peter, signed C. M. Rothe, preceding the text of both volumes. Small private library label removed to front pastedown; private stamp to titles verso; occasional foxing and light moisture stains to lower margin; the first five leaves of volume II with paper repairs, not affecting text; overall still quite attractive and an unusually complete set. First edition of the military and diplomatic campaign journals kept by Peter the Great, his lieutenants, and secretaries, which document the Russian war with Sweden and the legal and military development of the Russian Empire. These papers were to serve as the basis for any authoritative history of Petrine Russia and were compiled and edited by Peter himself, with the help of Aleksey Makarov and Petr Shapirov, but published only at Catherine the Great's behest after Peter's death. She tasked the conservative statesman, writer, and thinker, Prince Mikhail Shcherbatov, 1733-1790, with editing the work, as described in his preface. Peter was highly invested in leaving detailed documentation on the Great Northern War (1700-1721), which led to Sweden's defeat in the Baltic and established the Russian Empire as a major European political and military power. The journal describes in detail Peter's strategy, the movement of troops, and the course of battles. It lists military equipment, details material losses, and provides lists of wounded and imprisoned soldiers and generals. Especially noteable is the lengthy description of the signing of the Treaty of Nystad and the ensuing celebrations, replete with fireworks and festive banquets. The Journal is supplemented with numerous documents taken both from Peter's Cabinet Archive and from other state repositories. Among them are declarations relating to the unsuccessful 1710-1711 campaign against Ottoman forces, the detailed account of Peter's travels through Copenhagen, Amsterdam, and France in 1717, as well as Peter's Manifesto about those responsible for the continuing war (1719).<br/><br/>Most copies lack the entire second volume, which was published two years after the first; others have only the first part of volume two (up to p. 191). Our copy lacks only the last pages of the second part (pp. 461-763), which consist of supplements and edicts. Still very uncommon in such a state of completion, with almost no auction records both in Russia and abroad. In 2007, the Mollo-Stroganov copy (containing volume 1 only) sold for 3000 GBP. One of 1200 copies. Bitovt 1683. Svodnyi katalog 2282. Sopikov 4096.KVK, OCLC show various copies, mostly consisting of volume one only, at Den Haag, Glasgow, Göttingen, Thüringer Universitätsbibliothek, Toronto, UCLA and a set equal to ours at Universitätsbibliothek Bern, Diderot Lyon, and Swedish National Library. Entirely complete sets only held by Houghton.

gilt
The decorative application of gold or gold coloring to a portion of a book on the spine, edges of the text block, or an inlay in...[more]
vignette
A decorative design or illustration placed at the beginning or end of a ...[more]
First Edition
In book collecting, the first edition is the earliest published form of a book. A book may have more than one first edition in...[more]
calf
Calf or calf hide is a common form of leather binding.  Calf binding is naturally a light brown but there are ways to treat...[more]
spine
The outer portion of a book which covers the actual binding. The spine usually faces outward when a book is placed on a shelf....[more]
leaves
Very generally, "leaves" refers to the pages of a book, as in the common phrase, "loose-leaf pages." A leaf is a single sheet...[more]

Biblio is showcasing the top book published every year starting in 1919. See if your favorite modern first edition made the list! Check out our collecting first editions by the year.