I have over thirty years experience as a full-time bookseller, ten years as owner of a brick and mortar shop and twenty-one on the internet and at book shows. My particular interest is in books and other printed objects as agents or artifacts of social upheaval and cultural clash.

Asia Bookroom is a large open shop specialising in books on Asia. We also have smaller sections on the Middle East and the Pacific. Our stock ranges from antiquarian books through to new books. We also carry ephemera relating to Asia including an interesting range of 19th and 20th Century ephemera published in East Asia in English, Chinese and Japanese. Asia Bookroom issues regular specialised book lists on Asia and invite you to let us know your interests so that we can let you know of new arrivals as they come in to stock. And if you are in Australia's capital city Canberra we hope you will visit our shop!

Our store is located in a small village in the in the beautiful province of Groningen where many tourists come to enjoy the stunning views and nature of the World Heritage Wadden Sea. We offer a wide range of books in different languages.

Bolerium Books specializes in American social movements and related topics along books on China & Japan in English & Asian languages. You can sign up for free email lists in our subject areas at www.bolerium.com. We are located in San Francisco at 2141 Mission, Suite 300 (between 17th & 18th St.). We're open by appointment only during the current COVID-19 epidemic.

BOOKS ON THE ORIENT

Gregory and Beverly Gamradt, Books on the Orient, was established in 1979. We specialize in fine and rare books on Tibet, Central Asia, Mongolia, China, Nepal, The Himalayas, Japan, Korea, Southeast Asia, India, The Pacific, Oceania, Africa, The Middle East and select general titles. We also stock rare and unusual dictionaries as well as obscure bible translations from around the world. We expertly pack all items ordered.

Specializing in olderbooks on travel and exploration in Asia, and World War II Pacific and Southeast Asia.Online sales and antiquarian book shows in the American West.

We have bee selling books since 1988. We specialize in Women's History, Medieval History and the Far East, but also carry a small general stock. You may view books but an appointment is necessary as we do work form home.

John Randall has been selling rare and scholarly books on Asia since 1978. We hold more than 30,000 titles warehoused in East Sussex.We issue regular email catalogues in our Orientalia series on India & Pakistan, the Islamic World, Southeast Asia, China, Central Asia, and Ceylon.If you would like to receive any or all of these catalogues please confirm your interest by email.

Picture This Gallery is based in the UK. We deal in fine and rare books, as well as vintage posters and photography. We have a particular interest in Hong Kong, China and other Far East material. We also actively acquire material within our areas of interest.

I specialise in vintage photography, primarily those produced between the 1840's and early 1900's. Early travel and exploration is my speciality although i am interested in all exotic and eclectic early vintage photography that might be considered out of the ordinary. 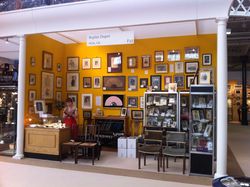 I specialise in Autograph letters, Manuscripts and signed photos in all fields. I am a member of the ABA, ILAB & PADA

Search within Bookstores Specializing in China