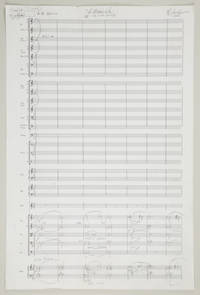 A Woman's Life for Soprano Solo and Orchestra. Autograph musical manuscript full score signed "R. Danielpour" and dated 2007 at upper right corner of page 1 and with "Thanks be to God New York 9/25/2007" at conclusion. With text by the distinguished African-American poet, singer, memoirist, and civil rights activist Maya Angelou (1928-2014)

A Woman's Life for Soprano Solo and Orchestra. Autograph musical manuscript full score signed "R. Danielpour" and dated 2007 at upper right corner of page 1 and with "Thanks be to God New York 9/25/2007" at conclusion. With text by the distinguished African-American poet, singer, memoirist, and civil rights activist Maya Angelou (1928-2014)

Folio (18" x 12"). Unbound. 96 pp. Notated in pencil on 28-stave paper with annotations and corrections in blue and red pencil.

Co-commissioned by the Pittsburgh Symphony and the Philadelphia Orchestra, A Woman's Life was first performed in Pittsburgh by the Pittsburgh Symphony under Leonard Slatkin with Angela Brown, soprano, on October 16, 2009. Maya Angelou (1928-2014) was a distinguished American poet, perhaps best-known for her series of autobiographies, the first of which, I Know Why the Caged Bird Sings (1969), detailing her life up to the age of 17, brought her international acclaim; she went on to write six more. She had the honor of reciting her poem "On the Pulse of Morning" at the inauguration of President Bill Clinton in 1993, the first poet to make such a recitation since Robert Frost at the inauguration of John F. Kennedy in 1961. Angelou was also an important civil rights activist, working with both Martin Luther King, Jr. and Malcolm X.

"I went to see Maya Angelou at her New York townhouse with my wife Kathleen in early July 2006 - I wanted to see if she would write texts that would show the trajectory of a woman's life, from childhood to old age. When I asked her about this she informed me that she already had it and that she would read them to us. And so without hesitation, holding our hands at her dining room table, she read beautifully and yet calmly from her collected poems eight poems which made a perfect cycle fulfilling my intention. It was honestly one of the greatest performances I have witnessed in my life and it was all I needed, along with seven of the eight poems she read, to write this cycle of songs." musicsalesclassical.com

A Woman's Life is thus in seven movements, based on the seven poems mentioned above:

I. Little Girl Speakings
II. Life Doesn't Frighten Me
III. They Went Home
IV. Come and Be My Baby
V. Let's Majeste
VI. My Life Has Turned to Blue
VII. Many and More

Grammy-Award winning Richard Danielpour "is an outstanding composer for any time, one who knows how to communicate deep, important emotions through simple, direct means that nevertheless do not compromise." (New York Daily News). A distinctive American voice, his music is of large and romantic gestures, brilliantly orchestrated, intensely expressive, and rhythmically vibrant." phytheasmusic.org

"Richard Danielpour... has become one of the most sought-after composers of his generation - a composer whose distinctive American voice is part of a rich neo-Romantic heritage with influences from pivotal composers like Britten, Copland, Bernstein, and Barber. His works are solidly rooted in the soil of tradition, yet [sing] with an optimistic voice for today... [They] speak to the heart as well as the mind." schirmer.com

"Like many American composers of his generation, Danielpour has largely divorced himself from serial techniques, which were important to early works such as the First String Quartet (1983). With First Light (1988), he found a new, distinctly American voice. He is best known for his orchestral and chamber music, including vocal works in both genres. Although he is often described as a neo-romantic, his musical language is broadly based and widely varied... In his vocal works, which display pristine idiomatic writing, he has collaborated increasingly with living poets. Many of his instrumental works are given evocative titles that refer to extra-musical sources." Laurie Shulman in Grove Music Online.

All items may be returned within 7 days of receipt, packed, shipped and insured as received.

Seller rating:
This seller has earned a 5 of 5 Stars rating from Biblio customers.
Biblio.com.au member since 2008
Syosset, New York
Ask Seller a Question

Established in 1977, our firm is recognized as one of the leading international dealers in musical autographs and manuscripts; rare printed music; rare books, prints, drawings and ephemera relating to music and dance dating from the 15th to the 20th centuries.We were honored to be interviewed by Final Note Magazine. To read the article please go to the following URL: http://www.finalnotemagazine.com/music-antiquarians-john-and-jude-lubrano/

New
A new book is a book previously not circulated to a buyer. Although a new book is typically free of any faults or defects, "new"... [more]
Unbound
A book or pamphlet which does not have a covering binding, sometimes by original design, sometimes used to describe a book in... [more]