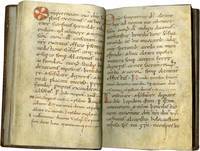 Liturgical Rites and Prayers used by a Bishop; in Latin, decorated manuscript on parchment

Liturgical Rites and Prayers used by a Bishop; in Latin, decorated manuscript on parchment

ONE OF THE OLDEST (PERHAPS THE OLDEST) MEDIEVAL CODICES ON THE MARKET EXTREMELY RARE ELEVENTH-CENTURY MANUSCRIPT. In Latin, decorated manuscript on parchment, Central France, c. 1040-1075. Dimensions 240 x 150 mm., 49 folios, complete, prickings remain, written in black, brown and light brown ink, copied mainly by one scribe with additions by five others, in a Carolingian minuscule script in one column of up to 19 lines, rubrics in red or pale red, 2- to 3-line initials in text ink or in red, many with penwork foliate decoration or red ink coloring, large initial 'O' with an eight-part roundel in red ink. BINDING: eighteenth-century brown leather over pasteboard. TEXT: A Pontifical is the liturgical book that includes the ceremonies reserved specially for a Bishop. The earliest Pontificals date from the tenth century, and the manuscript described here is thus an early example of the genre and is of considerable interest to scholars studying the liturgy. This represents an exceptional opportunity to acquire a complete eleventh-century manuscript. PROVENANCE: Written in Central France in the middle or third quarter of the eleventh century, c. 1040-1075, for use in a monastery or a local diocese, possibly in the Auvergne; Belonged to the Collegiate Church of Saint-Julien of Brioude (Auvergne) in the fifteenth century; Eighteenth-century annotation in black ink on verso of front fly leaf, eighteenth-century note in French at bottom margin of f. 1, an index to the contents of this volume was copied on the rear fly leaf in the same period; later in a Private collection, France. CONDITION: front flyleaf beginning to separate from binding, f.1 stained, small tear f. 26, cockling throughout which is significant in places, covers of binding warped, splitting along the joints near the bottom and with slight loss of leather at the bottom of the spine, but overall in good condition. Full description, images, and video available. (TM 1057)

verso
The page bound on the left side of a book, opposite to the recto page.
Parchment
Pages or book covering made from a prepared animal skin. Parchment describes any animal skin used for books, while vellum is a... [more]
spine
The outer portion of a book which covers the actual binding. The spine usually faces outward when a book is placed on a shelf.... [more]