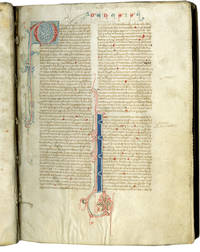 RARE THIRTEENTH-CENTURY PORTABLE BIBLE FROM SPAIN. In Latin, decorated manuscript on parchment, Spain, Kingdom of Castille (Seville?), c. 1240-1260. Dimensions 172 x 123 mm., 328 folios, prickings remain, copied by at least three scribes in gothic bookhands, NUMEROUS VERY FINE PEN INITIALS in red or blue with pen decoration in opposite color, violet also used, extending into margin, often with touches of green or very pale-yellow wash, parted red and blue initials with pen decoration of the same type. BINDING: bound in 15th-century brown leather over beveled wooden boards (possibly re-using original boards?) with rounded edges, cut flush with the bookblock, tooled in blind. TEXT: small, portable Bibles that include the complete text of the Old and New Testaments are one of the great innovations of the thirteenth century. Bibles of this type from Spain are much less common than those from France, England, or Italy. PROVENANCE: written in Spain in the middle of the thirteenth century, c. 1240-1260; the table of readings for the Mass on f. 2, is contemporary with the Bible and follows Franciscan use; ownership note on f. 328v, dated 1475, suggests this book was then owned by Dominican friars, possibly in Italy (Urbino?); later belonged to John S. Doney; extensive notes by Doney inside manuscript; belonged to Charles V. Wheeler of Washington, D. C.; sold by Walpole Galleries, July 29, 1919, lot 594; belonged to Coella Lindsay Ricketts (1859-1941), calligrapher and illuminator, of Chicago; belonged to Otto Orren Fisher (d. 1961?). CONDITION: missing a quire after f. 68v, one leaf after f. 289v, and four leaves and a quire after f. 310v, else complete, overall in very good condition, bottom half of the final leaf cut away (no loss of text), several small holes in back and front covers, slight cracking along front hinge, but in very good, serviceable condition. Full description and images available. (TM 844)

fine
A book in fine condition exhibits no flaws. A fine condition book closely approaches As New condition, but may lack the... [more]
beveled
Beveled edges, or beveled boards, describe a technique of binding in which the edges of book boards have been cut into slanted... [more]
edges
The collective of the top, fore and bottom edges of the text block of the book, being that part of the edges of the pages of a... [more]
New
A new book is a book previously not circulated to a buyer. Although a new book is typically free of any faults or defects, "new"... [more]
hinge
The portion of the book closest to the spine that allows the book to be opened and closed.
leaves
Very generally, "leaves" refers to the pages of a book, as in the common phrase, "loose-leaf pages." A leaf is a single sheet... [more]
Parchment
Pages or book covering made from a prepared animal skin. Parchment describes any animal skin used for books, while vellum is a... [more]