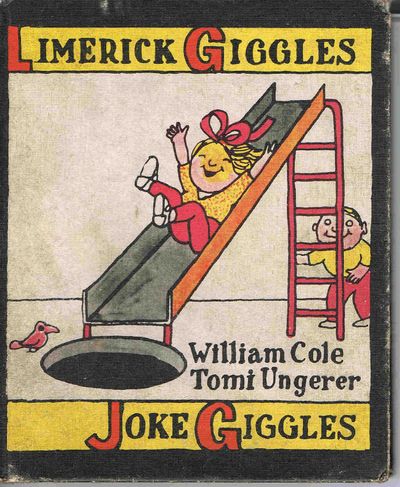 I moved in with my grandparents when I was a young reader and inherited the contents of my father’s childhood bookshelf. It was the early eighties and I was an avid reader. Along with the hardcover volumes of the Encyclopedia Britannica and Childcraft series from 1962, I devoured the yellowing children’s books and marveled over the names of my dad and aunts and uncles scribbled in penmanship so like my own on the interior pages (else fine).

Among my favorites was “A Case of the Giggles” by William Cole and illustrated by Tomi Ungerer. This slipcased set contains two square books full of limericks, rhymes, and nonsense poetry and art dominated by the popular palette of the late sixties: orange, dark green, brown, and gold.

These colors, rhymes, and images of oddly chubby-cheeked, doomed children have accompanied me throughout my life. Because of those associations and the whimsical imagery and deceptively simple style of Ungerer’s art, I never thought of his illustrations beyond the world of books meant for children. Imagine my surprise when I delved into the world of rare and collectible books and discovered the other side of his creative endeavors. Like so many other children’s writers, Tomi Ungerer dabbled in political satire, naughty cartoons, and intensely controversial subjects throughout his entire life.

The works that Ungerer created for children were bold and sometimes dark as well. His intent seemed to be to push children to look at scary things, to face their own fear, and to move forward (much like Edward Gorey, Roald Dahl, and Maurice Sendak). His many awards and the many who have been moved by his illustrations and books are a legacy to his passion.

On February 9, 2019, Tomi Ungerer passed away in his home in Cork, Ireland. Our condolences go to his family, friends, and fans. Read Ungerer’s obituary on his website.