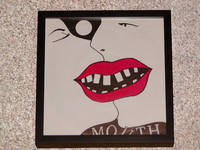 London, England: Recreational U. K. , 1981. First Edition. First Printing.. Hardcover. As New/No Dust Jacket, As Issued.. London, England: Recreational U. K. , 1981. Hardcover. As New/None, As Issued. First Edition/First Printing. 1 pages. Rare Mouth Band, contemporary graphic design, and post-punk collectible item. Mouth Band's debut vinyl record. The record album cover is very beautifully (and unobtrusively) framed in handmade black matte finish metal of the highest quality. The album itself is complete, with the pristine vinyl contained inside (the vinyl's edge is just barely visible as a ring on the upper portion of the cover). The cover design of the album is one of the most brilliant ever conceived and realized in the history of record album graphic design: A couple's tender kiss forms into one large, red-dominant, and wide-open mouth. The music is "Oh, Ah, Yeah!" and "Ooh?", two instrumental tracks in the same vein as Pigbag, Maximum Joy, and Rip Rig and Panic. An underground four-piece band which thrived in the heady 1980's British punk/rock scene, there is very little information today on Mouth, their debut single is quite obscure, and yet, their eponymous album deserves its place among the great cover album designs of the 20th century. William Klein would surely have been delighted by its brilliance, the sheer energy with which it pulsates, mirroring the fast, cool, and hip dance-rhythm music inside. A genuine rarity, this is an absolute "must-have" collectible, not just memorabilia, item for Mouth Band, contemporary music, and graphic design collectors. <b><i> This vinyl record is now rare. As far as we know, this is the only copy available online and is in especially fine condition: Clean, crisp, and bright, a pristine beauty. A rare copy thus. </b></i> One of the greatest graphic designs of the 20th century. A fine collectible copy. .

We ship at cost, based on weight, destination and shipping method. We ship Priority Mail with Delivery Confirmation in the US and Air Parcel Post globally. Other shipping methods are also available. We do not, however, ship via Media Mail or Surface Mail. Payable in $US dollars by Visa, Mastercard, American Express, Discover, PayPal ( send to paypal@modernrare.com ), personal check, cashiers check, money order, or wire transfer. Returns accepted, with prior notification, within 10 days after shipment, provided the item is in the same condition it was shipped. We make every effort to describe the item as accurately as possible. If it is not as described, we will refund your payment in full. Otherwise, the return is subject to a 15% restocking fee. Shipping costs are non-refundable. All magazine, DVD, and tape sales are final and non-refundable. Email us at info@modernrare.com or call/fax us at 773-826-4666. Calls accepted 24 hours a day, 7 days a week.

Seller rating:
This seller has earned a 5 of 5 Stars rating from Biblio customers.
Biblio.com.au member since 2003
CHICAGO, Illinois
Ask Seller a Question

ModernRare.com is exclusively an online bookstore. We believe this is the best way to satisfy our customers' expectations. Unlike an open bookstore, where books are routinely handled and may deteriorate, we guarantee the condition of our books as described. We specialize in modern firsts, photography, the arts, and erotica. You will also find a fine selection of signed copies, limited editions, and memorabilia because our ultimate goal is to deepen the pleasure of collecting books. We carry titles that we ourselves like and believe in -- books that we think will excite, enchant, and endure.

crisp
A term often used to indicate a book's new-like condition. Indicates that the hinges are not loosened. A book described as crisp... [more]
First Edition
In book collecting, the first edition is the earliest published form of a book. A book may have more than one first edition in... [more]
jacket
Sometimes used as another term for dust jacket, a protective and often decorative wrapper, usually made of paper which wraps... [more]
fine
A book in fine condition exhibits no flaws. A fine condition book closely approaches As New condition, but may lack the... [more]