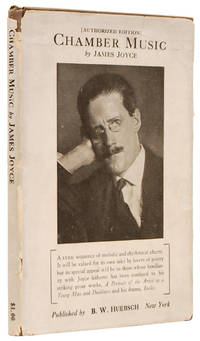 B. W. Huebsch, the son of a rabbi who immigrated to the United States from Germany, was a daring publisher based in New York City. He is responsible for the first American editions of D. H. Lawrence’s Sons and Lovers, Sherwood Anderson’s Winesburg, Ohio, and, perhaps most notably, the first printing of James Joyce’s Portrait of the Artist as a Young Man.

Avant-garde American poet Ezra Pound, who had been introduced to Joyce’s work by W. B. Yeats, had been so impressed by Joyce’s Portrait of the Artist as a Young Man that he helped to get the work serialized in the London literary magazine The Egoist. It appeared in twenty-five installments from February 1914 to September 1915. Joyce was then having a hard time finding a British publisher for the work in the form of a novel, so Pound arranged for its publication by Huebsch, issued December 1916.

In 1925, the publisher merged with Viking Press, where Huebsch worked as an editor and later, vice president. With Viking Press, Huebsch was involved in the first American publications of Harold Laski, Stefan Zweig, Franz Werfel, Erich Maria Remarque, and Thomas Mann, among others.

The B. W. Huebsch Papers, given to the Library of Congress by Huebsch and his family, reflect the publisher’s thoughts on literature and his career as well as his connections with organizations such as the American Civil Liberties Union and the National Association of Book Publishers.

In first editions from B. W. Huebsch, the same date must appear on the title page as on the copyright page with no additional printings listed.