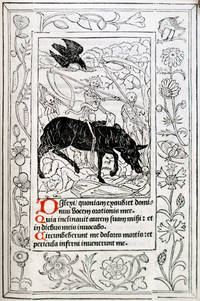 Paris: Simon du Bois for Geoffrey Tory, 1527. Tory, Geoffrey. Octavo. 140ff. With twelve woodcut illustrations from thirteen blocks, Tory's "pot cassé" device on title page and colophon, and each page with a four-piece border in twenty-six distinct combinations. The lower blocks of several borders feature coats of arms, including those of the king, François I; his mother, Louise of Savoy; Henri d'Albret, the King of Navarre; and d'Albret's queen, the sister of François. Text in lettre bâtarde, printed in red and black. With Almanac for 1528-1548. Bound in eighteenth-century crimson morocco with triple gilt rules on both panels, gilt turn-ins, flat spine gilt in four compartments, with two green morocco lettering pieces. Few light stains to both panels, some light rubbing to corners and outer hinges. A.e.g. Housed in a modern morocco-backed folding case. With the monogram stamp of noted Prussian collector Karl Ferdinand Friedrich von Nagler on bottom title-page margin. Leather booklabel of Paul Harth on front pastedown.

This Book of Hours by Tory is significant on a number of levels, foremost in that it represents his first use of a set of borders, known as "moderne." These differ completely from those used in Tory's Roman Book of Hours, printed two years earlier by Simon de Colines. These borders, which feature detached flora and fauna mainly in outline, complement the outlined woodcuts, which offer another unusual feature of the edition. The format has led to the suggestion that they were intended to be filled in by an illuminator. Of the woodcuts themselves, Tory's use of a two-page spread to depict the Annunciation, which achieves the effect of the angel facing Mary from the opposite page, is an unusual and noteworthy treatment. Much has been written about the king in the Adoration of the Magi and the crow and horse in the Triumph of Death, each figure appearing fully inked rather than in outline: Mortimer notes that "(t)his particular technique represents a departure from the line-for-line transfer of a preliminary drawing into an exploration of the creative possibilities of the woodblock itself." Ultimately, the importance of Tory's French Book of Hours is that it exemplifies a more innovative approach to the incorporation of Italian Renaissance printing techniques in France.

All books are guaranteed as described and may be returned, with prior notice, within ten days. All bills are payable within thirty days from the date of the invoice. Shipping and insurance are additional. Overseas shipments will be sent by air mail unless otherwise instructed.

Seller rating:
This seller has earned a 5 of 5 Stars rating from Biblio customers.
Biblio.com.au member since: 2008
Boston, Massachusetts
Ask Seller a Question

Bromer Booksellers specializes in rare and beautiful books. Owned and operated by Anne Bromer, who has been in the business of fine books for over fifty years, our shop carries a range of important private press books, designer bookbindings, illustrated books, children's books, and miniature books.

gilt
The decorative application of gold or gold coloring to a portion of a book on the spine, edges of the text block, or an inlay in...[more]
colophon
The colophon contains information about a book's publisher, the typesetting, printer, and possibly even includes a printer's...[more]
leaves
Very generally, "leaves" refers to the pages of a book, as in the common phrase, "loose-leaf pages." A leaf is a single sheet...[more]
device
Especially for older books, a printer's device refers to an identifying mark, also sometimes called a printer's mark, on the...[more]
octavo
Another of the terms referring to page or book size, octavo refers to a standard printer's sheet folded four times, producing...[more]
morocco
Morocco is a style of leather book binding that is usually made with goatskin, as it is durable and easy to dye. (see also...[more]
crisp
A term often used to indicate a book's new-like condition. Indicates that the hinges are not loosened. A book described as crisp...[more]
title page
A page at the front of a book which may contain the title of the book, any subtitles, the authors, contributors, editors, the...[more]
rubbing
Abrasion or wear to the surface. Usually used in reference to a book's boards or dust-jacket.
spine
The outer portion of a book which covers the actual binding. The spine usually faces outward when a book is placed on a shelf....[more]

P. T. Barnum was not only one of the founders of modern day circus performance, he was also the author of the second most printed book of the 19th century. Learn about collecting P. T. Barnum books and ephemera here.