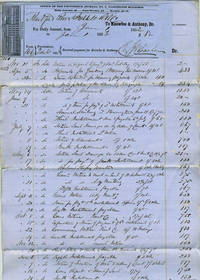 by Hartford, Providence and Fishkill Railroad

1885. Very good condition. Fascinating collection of approximately 100 documents pertaining to the development and operation of one of the earliest branch lines on the east coast, connecting Hartford to Providence, (and later Fishkill New York), planned in 1833 by a group of Hartford Connecticut businessmen, and chartered in 1847. This was a key transportation route for the Rhode Island and eastern Connecticut textile industries, established at the dawn of the American age of railroad. Although the line was never built as far east as Fishkill, NY (on the Hudson River), this would have provided an important transportation route for raw materials such as coal to travel from the west to the east, and for finished goods such as textiles and imports to travel from Providence on the east coast to the American west via the Hudson River and the Erie Canal. The westernmost depot completed was Waterbury Ct, and the work of laying the last 50.77 miles of track from there to Willimantic was laid in 1849. Cities served by the line include, from west to east: Waterbury, Bristol, New Britain, Newington, Hartford, Manchester, Vernon, Windham, Bolton, Andover and Willimantic. The archive consists primarily of correspondence, approximately 70 items from a variety of parties, including the paymaster, construction supervisors, attorneys, bankers, and top officials of the railroad. Many of the documents are not on letterhead, however, some of the Boston firms represented here are: Brooks & Ball, James F. C. Hyde, Maverick National Bank, and Thomas E. and F. H. Graves Attorneys. Connecticut firms include: Putnam Aqueduct Company, Samuel F. Jones, and First National Bank of Putnam. Rhode Island includes The Providence Journal. There are approximately half a dozen expense & claim sheets listing amounts under the headings Engineering, Real Estate, Grading & Masonry, Stations, Superstructure, Salaries & Labor, Incidental Expenses, Fencing, Track Repairs, Machine Shop Construction, Bridge Repairs, and Lumber, with each of the headings broken out for Ct. or RI. There are also approx. 20 checks on early Connecticut banks, including Home National Bank of West Meriden (1880s), the West Meriden Brittania Company, W. Bement, Treasurer of the NY & NH RR (1860s), and the Providence State Bank to William H. Hoppin, Treasurer (1850s). The most fascinating correspondence is that of the railroad's attorney in Providence, Samuel Currey (sometimes spelled Curry) and the President, James Bunce, during the period of financial difficulty which ended with the replacement of Bunce by William Sprague, previously governor of Rhode Island, and the absorption of the H P F by the much larger and successful New Haven and Hartford Railroad Company. A letter from Currey to Bunce dated March 27, 1855, demonstrates Currey's concerns for his own finances and for the future of the company: "Considering however that you are soon as rumor has it to leave the Presidency of the Company, and doubting very much what may become of its affairs when its interests pass into other hands, I own that I feel apprehensive of being a much greater loser by the Company than I had until very recently expected." Other correspondence from Currey to Bunce shows the difficulties encountered in constructing the line through what had been predominantly farm land, with many claims made by landowners for fencing, borrow pits and other items: "I am sorry to inform you that several other land owners between the Summit and the state line are more or less in the same situation as to fencing the road with [Mr. Wickes] and even if they forbear to resort to the extreme leniency provided by the Charter, they will claim damages [because] to claim anything of a railroad is to get it". (April 21, 1855). Many documents pertain to the actual day to day running of the business, including land being acquired by the railroad, engineering field notes, disputes & claims made by existing landowners, claims by passengers injured by the railroad, construction documents pertaining to the station houses, bridges and tracks, accounting reports, tallies of tickets sold, and a variety of financial documents. This collection provides a fascinating glimpse into the life of a railroad which played a central role in supplying the transportation needs for eastern Connecticut's and Rhode Island's textile mills during the Industrial Revolution. Parts of the Hartford Providence and Fishkill line still exist today as a rail trail. As Jamie H. Eves writes in 'Transportation, Railroads, and the Mills' (Windham Textile and History Museum, MillMuseum.org): "hikers routinely walk along portions of the old H. P. & F. bed between Bolton and Willimantic, a distance of about 14 miles. ... One imagines the countryside as it must have looked a century ago - an open, undulating land of farms and fields, with only a few trees, and the great sweeping vistas of the Hop River Valley below. The green, pastoral landscape would have offered a compelling contrast to the sooty black trains, the billowing clouds of coal smoke, the piercing whistle of the steam engines, the loud chuffing of gears, and the rhythmic clacking of the steel wheels on the rails"

30 day return guarantee, with full refund including shipping costs for up to 10 days after delivery if an item arrives mis-described or damaged.

Seller rating:
This seller has earned a 4 of 5 Stars rating from Biblio customers.
Biblio.com.au member since: 2009
Garrison, New York
Ask Seller a Question

Booksellers for over 40 years, members of prominent trade associations (ABAA, ILAB, ANZAAB, IMCOS, ANZMS, PBFA). We are located at Garrison NY, a stone's throw from the Metro North Hudson line train, just over 1 hr. from NYC on the banks of the Hudson River. Books, maps, prints & ephemera bought & sold.

New
A new book is a book previously not circulated to a buyer. Although a new book is typically free of any faults or defects,...[more]

How to identify a rare book

Yes, we have a new look!

Questions, comments, suggestions? We want to hear from you!

Tell us what you think!