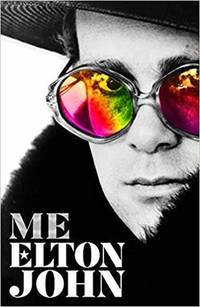 New York, New York, U.S.A. : Henry Holt and Co., 2019. 1st Edition 1st Printing. Hardcover. As New/As New. 8vo - over 7¾ - 9¾" tall. Christened Reginald Dwight, he was a shy boy with Buddy Holly glasses who grew up in the London suburb of Pinner and dreamed of becoming a pop star. By the age of twenty-three he was performing his first gig in America, facing an astonished audience in his bright yellow dungarees, a star-spangled T-shirt, and boots with wings. Elton John had arrived and the music world would never be the same again. His life has been full of drama, from the early rejection of his work with song-writing partner Bernie Taupin to spinning out of control as a chart-topping superstar; from half-heartedly trying to drown himself in his LA swimming pool to disco-dancing with Princess Diana and Queen Elizabeth; from friendships with John Lennon, Freddie Mercury, and George Michael to setting up his AIDS Foundation to conquering Broadway with Aida, The Lion King, and Billy Elliot the Musical. All the while Elton was hiding a drug addiction that would grip him for over a decade. In ME, Elton also writes powerfully about getting clean and changing his life, about finding love with David Furnish and becoming a father. In a voice that is warm, humble, and open, this is Elton on his music and his relationships, his passions and his mistakes. This is a story that will stay with you by a living legend. Includes three sections of black-and--white and color photographs, 384 pp, with Index, As new, unread, first edition, first printing, in as new, mylar-protected dust jacket. (Not remainder-marked or price-clipped) BUND

Books shipped in secure packaging via USPS Media Mail, Priority Mail or Global Priority Mail, upon receipt of payment, unless customer requests another method of delivery. Shipping is within 24 hrs. of receipt of payment for money orders, and after three business days for personal checks. All book jackets are protected in mylar covers from Brodart. Customers have three business days within which to contact us with complaints about merchandise by e-mail. Returns must be approved, in original packaging material, and in the same condition as when shipped. Because we make every effort to have the best possible merchandise in the best condition, to describe it accurately and to package it securely, we will in most cases accept approved returns. Approved returns will be cheerfully refunded, or credit given toward other books. Our aim is to please, and to earn your return business with superior service and prompt delivery.

Seller rating:
This seller has earned a 4 of 5 Stars rating from Biblio customers.
Biblio.com.au member since 2003
Los Angeles, California
Ask Seller a Question

Modern Literature, Mysteries, and More!
We specialize in collectible, contemporary signed first editions. First edition means the first printing. (Later printings of the first edition are typically not printed on acid-free paper, and should be avoided by collectors.) Signatures are obtained by us in person. Inscribed books sold by us may contain a line, a phrase, or a sketch that the author has chosen to add. Our signed books are not dedicated to anybody in particular (not to your grandmother, your Aunt Gladys, your ex-lover or your former cellmate), except in the rare case of a presentation copy from an author to a noteworthy person. All our books are hardcover, unless the book is an Advance Reading Copy, Uncorrected Proof, or PBO. You can expect that the books we send you will be as described, and in a physical condition worthy of the author’s having signed them. We do not sell remainder-marked books, signed or otherwise

jacket
Sometimes used as another term for dust jacket, a protective and often decorative wrapper, usually made of paper which wraps... [more]
First Edition
In book collecting, the first edition is the earliest published form of a book. A book may have more than one first edition in... [more]