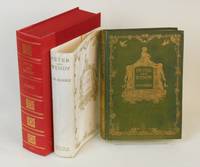 London: Hodder & Stoughton, 1911. First Edition. Hardcover. Very good +/very good. Bedford, F. D.. First printing, octavo size, 275 pp., with white dust jacket (as pictured in Loker), in a custom box. Sir James Matthew Barrie (1860-1937) wrote numerous novels and plays for both children and adults, but he is best known for "Peter Pan", a hugely successful play set in the magical world of Neverland; the play has been performed many times and has been adapted in films and literary works. The beloved character first appeared in Barrie's novel "The Little White Bird", and Barrie went on to write the classic story of Neverland as the play "Peter Pan; or, The Boy Who Wouldn't Grow Up"; the script was then adapted as a novel, "Peter and Wendy". This novel is the story in its best-known form, featuring the adventures of the Darling children in Neverland, and their encounters with Captain Hook and his crew of pirates.

This edition contains lovely detailed illustrations by British book illustrator Francis Donkin Bedford (1864-1954), who contributed illustrations to numerous popular literature such as "A Christmas Carol" and "A Book of Nursery Rhymes".

___CONDITION: A bit better than very good, with clean boards, the gilt lettering and decorations bright, straight corners with a bare minimum of rubbing, a strong, square text block with solid hinges, and the only prior owner marking being a vintage gift inscription on the front free endpaper; head and tail of the spine bumped, offsetting to the free endpapers, a small, old dampstain towards the bottom margin of the front pastedown with a corresponding area to the front free endpaper, some scattered foxing to the text block edges and a few pages. The dust jacket is very good, unclipped, with overall light soiling and edgewear, and with some professional restoration done by a prior owner (mostly to the head and tail of the spine, and the bottom corner of the front flap). The custom clamshell box is near fine, strong and sturdy, clean, without wear, slight discolouring and sticky residue to the cloth at the top edge, else fine.

___Swan's Fine Books is pleased to be a member of the ABAA, ILAB, and IOBA and we stand behind every book we sell. Please contact us with any questions you may have, we are here to help.

Peter and Wendy (1911) is the title of James M. Barrie's novelization of his most famous play, Peter Pan: or, The Boy Who Wouldn't Grow Up (1904). Inspired by Barrie's friendship with the Llewelyn Davies family, both the play and the novel tell the story of Peter Pan, a mischievous young boy who can fly, and his adventures on the island of Neverland with Wendy Darling and her brothers. The novel follows the play closely, though its final chapter is an addition to the original work. Peter and Wendy was first published in 1911 by Hodder & Stoughton in the United Kingdom and Charles Scribner's Sons in the United States. In 1929, Barrie gave the copyright to the works featuring Peter Pan to Great Ormond Street Hospital (GOSH), Britain's leading children's hospital.

We cheerfully accept returns for any reason within 30 days, so long as the book(s) is/are returned in the same condition as when sent. We will refund the price you paid for the book plus shipping.

Seller rating:
This seller has earned a 5 of 5 Stars rating from Biblio customers.
Biblio.com.au member since 2017
Walnut Creek, California
Ask Seller a Question

Swan's Fine Books offers collectable and rare books on a wide variety of classical subjects, with specialities in Fine Press and Illustrated Books.We have many more books than are currently listed online, so if you are looking for a special book and don't see it listed, please call to inquire.

jacket
Sometimes used as another term for dust jacket, a protective and often decorative wrapper, usually made of paper which wraps... [more]
spine
The outer portion of a book which covers the actual binding. The spine usually faces outward when a book is placed on a shelf.... [more]
raised band(s)
Raised bands refer to the ridges that protrude slightly from the spine on leather bound books. The bands are created in the... [more]
IOBA
... [more]
Cloth
"Cloth-bound" generally refers to a hardcover book with cloth covering the outside of the book covers. The cloth is stretched... [more]
octavo
Another of the terms referring to page or book size, octavo refers to a standard printer's sheet folded four times, producing... [more]
ABAA
... [more]
fine
A book in fine condition exhibits no flaws. A fine condition book closely approaches As New condition, but may lack the... [more]
tail
The heel of the spine.
clamshell box
A protective box designed for storing and preserving a bound book or loose sheets. A clamshell box is hinged on one side, with... [more]
rubbing
Abrasion or wear to the surface. Usually used in reference to a book's boards or dust-jacket.
text block
Most simply the inside pages of a book. More precisely, the block of paper formed by the cut and stacked pages of a book.... [more]
ILAB
... [more]
First Edition
In book collecting, the first edition is the earliest published form of a book. A book may have more than one first edition in... [more]
edges
The collective of the top, fore and bottom edges of the text block of the book, being that part of the edges of the pages of a... [more]
title page
A page at the front of a book which may contain the title of the book, any subtitles, the authors, contributors, editors, the... [more]
gilt
The decorative application of gold or gold coloring to a portion of a book on the spine, edges of the text block, or an inlay in... [more]