Rare books Illustrated Books More Rare Books from Philadelphia Rare Books & Manuscripts Co., LLC (PRB&M) Report of the committee appointed by the Philomathean Society of the University of Pennsylvania to translate the… 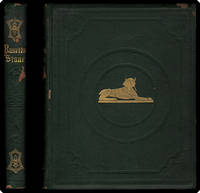 Report of the committee appointed by the Philomathean Society of the University of Pennsylvania to translate the inscription on the Rosetta Stone.

Report of the committee appointed by the Philomathean Society of the University of Pennsylvania to translate the inscription on the Rosetta Stone.

[also bound in] Catalogue of members of the Philomathean Society ... Philadelphia: Ringwalt & Co, 1859. Small 4to. 24 pp.; and tipped-in lithographed copyright notice.
Probably the most famous => American all-lithographed book of the 19th century, with => chromolithographic illustrations and embellishments that lavishly enhance the whole. In his already classic study of 19th-century American color plate books, Stamped with a National Character, William Reese writes of this work: "The first full translation of the Rosetta Stone, undertaken by three members of the University of Pennsylvania . . . [student body], provided the basis for a notable display of chromolithographic book illustration by the Philadelphia lithographer, Louis Rosenthal. The entire book was lithographed, presumably to better accommodate the hieroglyphs, but Rosenthal went far beyond necessity. He created hundreds of crude but exuberant chromolithographs intermingled with the text, showing scenes from Egyptian life or elaborate borders in quasi-Egyptian motifs. It is one of the few American books printed entirely by lithography" (p. 99).
The genesis of the work was the arrival at the Philomatheans' building of a donated cast of the Rosetta Stone. Three Philomatheans — Henry Morton, Charles R. Hale, and Samuel Huntington Jones — worked out a plan to translate the stone and produce the book here offered. Hale undertook to transcribe and translated the Greek and Demotic texts, Jones produced the historical introduction, and Morton supplied the hieroglyphic inscriptions, drawings, and other illustrations. The first edition of the finished work appeared just before Christmas, 1858, in an edition of 400 copies and sold out immediately.
In late January 1859, the Society wished to print a second edition of 600 copies; but because no lithographic establishment could afford not to reuse lithographic stones, all stones save those for the last 20 or so pages of their work had been ground down. Thus in the second edition, i.e., the edition offered here, the artistic embellishments are "largely a new work," in the words of Randolph G. Adams ("The Rosetta Stone," in Bibliographical Essays, A Tribute to Wilberforce Eames, p. 234).
In some very few copies of this second edition, p. 6 bears the signatures of the three Philomatheans who produced the book. This is, unfortunately, not one of those few, hence the lower price. But this copy does have the oft-missing copyright notice at the rear.
Provenance: Signature on endpaper of "Wm. Randolph Taylor," with later gift inscription beneath. Taylor was educated at the University of Pennsylvania, a professor of botany there, and later at the University of Michigan.

Reese, Stamped with a National Character, 91; Bennett, American Color Plate Books, p. 93. On the story of the production of the book and for a chart showing which pages of the second edition are restrikes from the first, see: Randolph G. Adams, "The Rosetta Stone," in Bibliographical Essays, A Tribute to Wilberforce Eames, pp. 227–40. Publisher's dark green cloth, covers stamped in blind with a gilt center device of a sphynx; spine also stamped in blind but with two gilt-stamped vertical lozenges and the title in gilt. About six small areas of loss of cloth on spine or board, some probably silverfish damage. Bookseller's description of a different copy pasted to rear pastedown. A good++ copy well worth having.

device
Especially for older books, a printer's device refers to an identifying mark, also sometimes called a printer's mark, on the...[more]
Cloth
"Cloth-bound" generally refers to a hardcover book with cloth covering the outside of the book covers. The cloth is stretched...[more]
plate
Full page illustration or photograph. Plates are printed separately from the text of the book, and bound in at production. I.e.,...[more]
New
A new book is a book previously not circulated to a buyer. Although a new book is typically free of any faults or defects,...[more]
gilt
The decorative application of gold or gold coloring to a portion of a book on the spine, edges of the text block, or an inlay in...[more]
G
Good describes the average used and worn book that has all pages or leaves present. Any defects must be noted. (as defined...[more]
spine
The outer portion of a book which covers the actual binding. The spine usually faces outward when a book is placed on a shelf....[more]
First Edition
In book collecting, the first edition is the earliest published form of a book. A book may have more than one first edition in...[more]