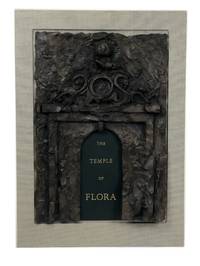 San Francisco: The Arion Press, 1984. Folio (20 1/2 x 14 inches). 28 drypoint etchings, combining engraving and drypoint, using hand and electric tools, by Jim Dine, plus an additional print on chine colle from the second state of the frontispiece (entitled "Details from Nancy's Garden"), signed by Dine, laid in separate printed folder. Original quarter green morocco, gilt-lettered on spine; custom cloth box with an inset bas-relief sculpture designed by Dine and cast by Ron Dillon, representing Flora's temple gate on upper cover. LIMITED EDITION OF JIM DINE'S TEMPLE OF FLORA, number 158 of 175 copies signed by the artist and containing an additional signed print from an edition of 175. Dine's modern reinterpretation of John Thornton's 1807 work - one of the greatest of all botanical color-plate books - of the same name. Edited by Glenn Todd and Nancy Dine; with botanical notes compiled by Glenn Todd; poetry by John Ashbery, Richard G. Barnes, Hart Crane, Robert Creeley, E. E. Cummings, Hilda Doolittle, Robert Graves, Thom Gunn, Robert Hass, Andrew Hoyem, Ronald Johnson, Denise Levertov, Josephine Miles, Frank O'Hara, Ron Padgett, Robert Pinsky, Sylvia Plath, Ezra Pound, Kenneth Rexroth, James Schuyler, Edith Sitwell, Wallace Stevens, Philip Whalen, Jonathan Williams, and William Carlos Williams; and with 28 dry-point engravings by Jim Dine. "Our edition is a modern conceit: Dine used many of its color mezzotints as models for his own floral prints; its marriage of botanical information, philosophical commentary, and poetry was emulated by our editors; and the design of the volume is on a similarly sumptuous scale. While the later botany may be more exacting, Dine's renderings are less so, yet far more expressive. Some of the poems were commissioned to be written especially for this edition" (Arion Press) The type is Monotype and handset Romulus. The paper is Rives BFK. Intaglio printing by R. E. Townsend, Inc., Georgetown, Massachusetts. Bound in boards with green goatskin spine and grey-green cloth sides; enclosed in a grey-green cloth box with inset bas-relief "Flora's Temple Gate" by Jim Dine, cast in bonded bronze, on the lid. Offered directly from the personal archives of Jim Dine. .

second state
used in book collecting to refer to a first edition, but after some change has been made in the printing, such as a correction,...[more]
G
Good describes the average used and worn book that has all pages or leaves present. Any defects must be noted. (as defined...[more]
folio
A folio usually indicates a large book size of 15" in height or larger when used in the context of a book description....[more]
spine
The outer portion of a book which covers the actual binding. The spine usually faces outward when a book is placed on a shelf....[more]
goatskin
Goatskin, leather made from goat, is durable and easy to dye. The original and finest examples of Morocco binding are...[more]
Cloth
"Cloth-bound" generally refers to a hardcover book with cloth covering the outside of the book covers. The cloth is stretched...[more]
morocco
Morocco is a style of leather book binding that is usually made with goatskin, as it is durable and easy to dye. (see also...[more]