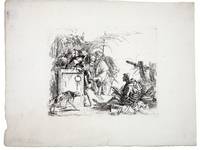 Venice, 1750. From the Collection of Arthur & Charlotte Vershbow. The complete set of ten etchings, plates 140 x 180 mm, sheets 235 x 305 mm, good to very good impressions, with wide margins (occasionally uneven), three plates with a capital R watermark, one with O, and two with an indistinct proprietary mark, presumably from the edition published by G. Manfrin in 1785, with stitching holes in the left margin. In generally good condition. Each sheet mounted in a modern cloth solander box. Provenance: purchased from Hellmuth Wallach, 1954. Tiepolo began making prints in the 1730s, and the Vari Capricci was his first set of etchings. Having studied in the collections of Anton Maria Zanetti the Elder and Zaccaria Sagredo, this series is a personal response to the prints and drawings of Salvator Rosa and Giovanni Benedetto Castiglione. They generally show groups of figures at rest or in contemplation: pastoral landscapes with soldiers and young boys, a horse and rider with a groom, women and children with goats and other animals. The ancient or Arcadian world is occasionally evoked, with figures set beside tombstones, classical urns and fragments of obelisks. In one print the figure of Death is shown reading from an open book, faced by a group of the living. "From about 1742 Zanetti began including the Vari Capricci in his own volume of woodcuts, the Raccolta di Varie Stampe, writing to the Prince of Lichtenstein in 1751 that he had added prints by Tiepolo, '"being of a most spirited and piquant taste and worthy of the highest esteem." These prints were followed by a second series of twenty-three etchings, the Scherzi di fantasia, which was not widely circulated until after Tiepolo's death. Tiepolo's etchings received great acclaim among collectors and connoisseurs, their enigmatic meanings considered a mark of his brilliance and a successful rendering of the term capriccio. In 1774 Pierre-Jean Mariette wrote of Tiepolo's "rich and fertile genius ... it shines above all in his prints." The dating of Tiepolo's two etched series, the Vari Capricci and the Scherzi di fantasia, has been the subject of lengthy debate, most recently by Jaco Rutgers (Print Quarterly, XXIII, 3, 2006, pp. 254-63)" (Royal Collection Trust). De Vesme 3-12; Rizzi 29-38.

G
Good describes the average used and worn book that has all pages or leaves present. Any defects must be noted. (as defined...[more]
Cloth
"Cloth-bound" generally refers to a hardcover book with cloth covering the outside of the book covers. The cloth is stretched...[more]