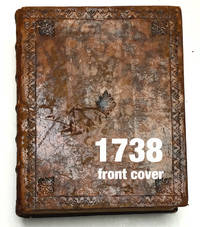 Hardcover. Very Good/No Jacket. Three books in one volume, 8vo, 490pps, 247pps, 243pps, German text (occasional Latin), contemporary full leather w/front detached, folding plans (St Petersburg, and the Tsarist empire) 25 plates, maps, headpiece devices, portrait (Tsar Peter),Title page printed in red& black; folding map (Moll: Grande Russie, after Perry); Russland , includes Lorenz Langes: voyage to Beijing ; Muller, J B: Leben der Ostiaken , description of Saint Petersburg (with the folding map) ; The map of St Peterburg is early, rare and important. According to Bagrow the first map of the area where St Petersburg would rise was mapped by Gossler in 1703. In 1713 Tsar Peter decided to move the Russian capital there. In 1715 the establishment of the Naval Academy in St Petersburg intensified surveys of the Russian coast of the Baltic Sea. The design of Vasiljew island crossed by channels within the setting of a city in the Neva delta was first printed in Paris by de Fer in 1717. A similar plan is found in the various editions of Weber). This map is undated (but proper to the very first Weber edition!!), the text in the map is in German, the page indication is 432 and it has a little inset with Crohn Schlot, a curious variation of Crohn Stadt used in the earliest days of its construction under Admiral Cruys. The text is surprisningly clean and quite readaable, brownish imprints on textual portions due to aging but almost no stains, spots, book plate on pastedown and stamps of a Riga library for Eastern provincial Russian historical works.

Review this book and you‚Äôll be entered for a chance to win !

30 day return guarantee, with full refund including original shipping costs for up to 30 days after delivery if an item arrives misdescribed.

Seller rating:
This seller has earned a 3 of 5 Stars rating from Biblio customers.
Biblio.com.au member since 2013
Flemington, New Jersey
Ask Seller a Question

Since 1991 BOHEMIAN BOOKWORM has been pleased to sell rare, vintage, antiquarian and distinctive used books to discriminating bibliophiles and other book and ephemera buyers searching for uncommon 1st editions and "out of print" gently used books and ephemera.

jacket
Sometimes used as another term for dust jacket, a protective and often decorative wrapper, usually made of paper which wraps... [more]
plate
Full page illustration or photograph. Plates are printed separately from the text of the book, and bound in at production. I.e.,... [more]