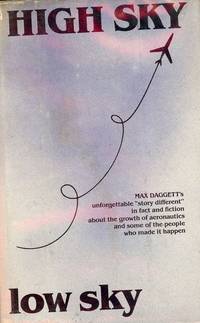 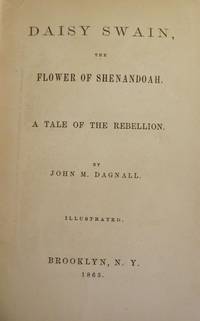 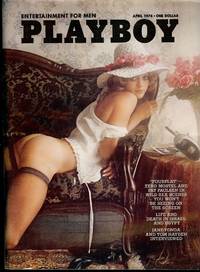 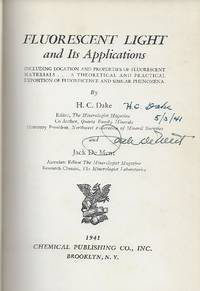 Description:
Brooklyn, NY: Chemical Publishing Co., Inc., 1941. First Edition, Signed by Dake (and dated "5/3/41") and De Ment on the title page. A General Electric team designed the first practical and viable fluorescent lamp (U.S. Patent No. 2,259,040) that was first sold in 1938. It should be noted that General Electric bought the patent rights to Edmund Germer's earlier patent. According to The GE Fluorescent Lamp Pioneers, "On Oct 14, 1941, U.S. Patent No. 2,259,040 was issued to George E. Inman; the filing date was Apr 22, 1936. It has generally been regarded as the foundation patent. A very early book on fluorescent lighting and scarce, particularly signed by the authors- two prominent mineralogists. Gift inscription on the front pastedown. Tall 8vo., plain blue cloth with title on spine; 256 pages. Illustrated.. Very Good (covers nice with hint of fading; contents clean & tight).
Item Price:
AU$184.34
$7.00 shipping to USA 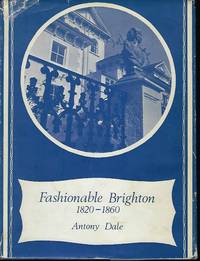 Description:
[Newcastle Upon Tyne: Oriel Press Limited, 1967. Second Edition. Revised with new illustrations and recently-discovered drawings. Signed presentation from Dale on the front endpaper: "Recalling with pleasure our association at Paris. Antony Dale. 18/3/68." Also, with the signature of F.O. Brew on the same page. Antony Dale is an author, historian and conservationist. He founded the Regency Society in 1945 and was its honorary secretary for 45 years. Among his many achievements, he led the fight to save Brunswick Square and Adelaide Crescent from demolition and spearheaded the campaign to stop the gardens of Regency Square being turned into an over-ground car park. He died in 1993, aged 81. This book is a study of the architecture, planning, development, and social life of the famous resort during the first half of the nineteenth-century. Small quarto: blue cloth in dust jacket; 192 pages. Illustrated.. Very Good (covers bright; contents clean & tight); some rubbing, wear & short tears (few internal… Read more
Item Price:
AU$110.60
$7.00 shipping to USA 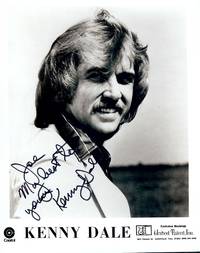 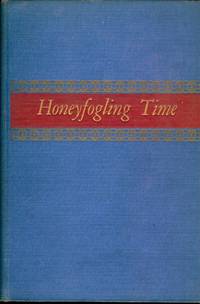 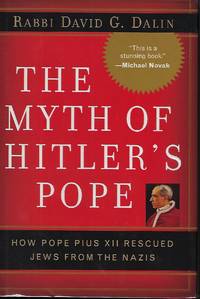 Description:
Washington, Dc: Regnery Publishing Inc., 2005. First Edition, first prjnting. Scarce signed presentation from Dalin on the front endpaper: "For Brett McCow, With best wishes, David Dalin." Dalin is an American rabbi and historian. The Literary Editor of The Weekly Standard, commissioned Dalin to write an omnibus review article on the books relating to Pope Pius XII, who was the center of controversy in the wake of John Cornwell's book Hitler's Pope. Published in February 2001, Dalin's essay concluded that Pius XII was a Righteous Gentile who saved hundreds of thousands of lives during the Holocaust and that the Pope 'more than most to shelter Jews. Uncommon to find a signed copy of this title!. Tall 8vo., red boards in dust jacket; 209 pages. Near fine (cover nice; contents clean & tight); short tear & small crease d/j.
Item Price:
AU$184.34
$7.00 shipping to USA 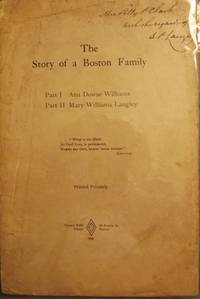 Description:
1903. DALL, Caroline Healey. THE STORY OF A BOSTON FAMILY. Par 1: Ann Dowse Williams. Part 2: Mary Williams Langley. Boston: Privately Printed, 1903. Printed wraps; 29 pages. First Edition. The biographies of two early Boston matrons, with Mary Williams Langley being the mother of famed aviator and astronomer Samuel Pierpont Langley. Rare- I have been unable to locate any other first edition copies of this title for sale. Signed presentation from Samuel Pierpont Langley on the front cover (which is also the title page): "Mrs. Polly P. Clark, with the regards of S.P. Langley." Born in Roxbury, Massachusetts in 1834, Langley was a professor of astronomy and physics and is the inventor of the bolometer, which is able to detect and measure electromagnetic radiation. He also developed an interest in aeronautics and began building one of the first aircraft, named Aerodrome. Several models, which were catapulted of off houseboats, failed but in 1896 one model flew for more than half a mile. Later… Read more
Item Price:
AU$2,212.05
$7.00 shipping to USA 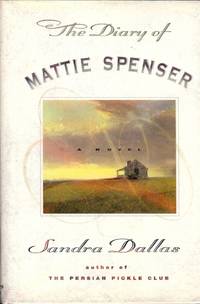 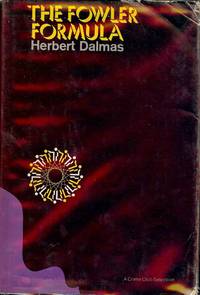 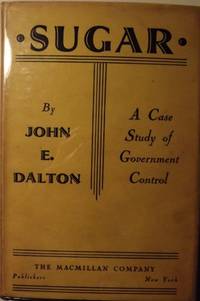 Description:
1937. DALTON, John E. SUGAR: A CASE STUDY OF GOVERNMENT CONTROL. NY: Macmillan Company, 1937. 8vo., gray cloth in dust jacket. First Edition. A book espousing government intervention as a means to regulate the sale of sugar through a quota system as a means of stabilizing an otherwise unstable sugar market. Signed presentation from Dalton on the front endpaper: "For Katherine B. Butler, J.E. Dalton, 2/10/39." Also with an autograph note signed from Dalton laid in on his personal complimentary card: "A dull book for a voyage. I'm sorry but it is the best that I can do- Jack." Scarce to find nice copies in the original dust jacket, much less signed.
Item Price:
AU$368.68
$7.00 shipping to USA 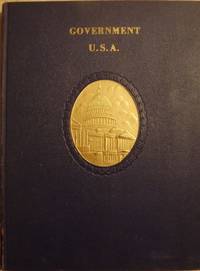 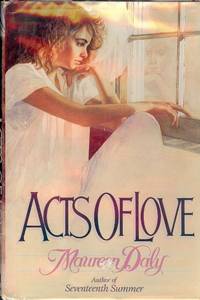 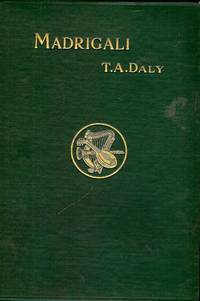 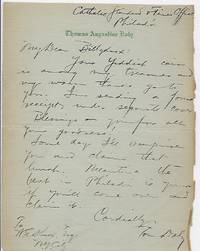 Description:
One page, undated autographed letter signed on personalized stationery: "Catholic Standard Times Office, Philadelphia. My dear Bill Know: Your Yiddish coin is among my treasures and my warm thanks go to you. I'm sending a formal receipt under separate coverage. Blessings on you for all of your goodness! Some day I'll surprise you and claim that lunch. Meantime the best in Philadelphia is yours if you'll come over and claim it. Cordially, Tom Daly. To W.E. Knox, Esq. N.Y. City." Thomas Augustine Daly is best known for his humorous verse primarily in Italian or Irish-American dialect. Although popular for forty years as a poet, he was a versatile writer, and he built an international reputation as an author, columnist, and lecturer. He is credited for making the Catholic Standard Times the most successful Catholic weekly newspaper in the United States, Daly was acknowledged for his reviews, editorials, and travel notes. His columns of jokes and verses ran daily in the… Read more
Item Price:
AU$66.36
$7.00 shipping to USA 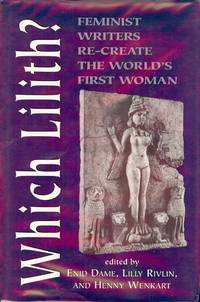 Description:
1998. DAME, Enid; [Editor]. WHICH LILITH? Feminist Writers Re-Create The World's First Woman. Also edited by Lilly Rivlin and Henny Wenkart. Introduction by Naomi Wolf. Northvale, NJ: Jason Aronson Inc., [1998]. Small quarto, black cloth in dust jacket. First Edition. An anthology focusing on Lilith, Adam's first wife, who has been a part of Jewish culture in the writings called midrash- imaginative interpretations or commentaries on Scripture. Old Lilith stories were primarily told by men but now contemporary women are giving it a go!! Signed presentation from Enid Dame on a front blank page: "To Barbara, a wonderful friend and poet. Please enjoy these writings. With love, Enid Dame. 4-30-00." Also inscribed by a contributor: "To Barbara, Thanks for coming to hear our contributions. Enjoy the rest of the book. Best of luck to you. Elaine Barnartt-Goldstein." Near fine in d/j. $85.00.
Item Price:
AU$125.35
$7.00 shipping to USA 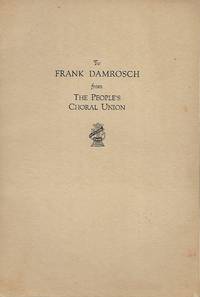 Description:
[No publication information], 1929. First Edition. Signed presentation from Julius Henry Cohen to James McEwan on a front black page: "To James McEwan, many compliments, Julius Henry Cohen." Booklet contains a poem composed to celebrate Frank Damrosch's 70th birthday. Laid in is a typed letter signed, dated Nov.21, 1929 and on Cohen's personalized stationery, presenting the book. Damrosch [1859-1937] was a German-born American music conductor and educator. In 1905, Damrosch founded the New York Institute of Musical Art, which later became the Juilliard School. In 1892, Damrosch founded the People's Singing Classes designed to instruct interested adults, especially working people, in the rudiments of music and to perform great choral works. Two years later the advanced classes were organized into the People's Choral Union and was under his personal supervision until 1913. Julius Henry Cohen was an influential lawyer in the first half of the twentieth century. He assisted in the formation of the Port… Read more
Item Price:
AU$51.61
$7.00 shipping to USA 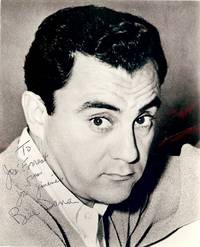 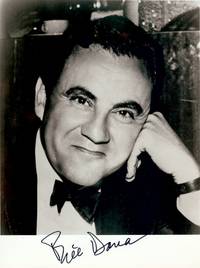 Join the Bibliophile’s Club and save 10% on every purchase, every day — up to $25 savings per order!