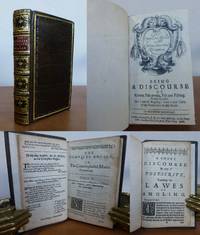 THE COMPLETE (COMPLEAT) ANGLER OR THE CONTEMPLATIVE MAN'S RECREATION. Being a discourse of rivers, fish-ponds, fish and fishing. To which is added the laws of angling: with a new table of the particulars in this book.

THE COMPLETE (COMPLEAT) ANGLER OR THE CONTEMPLATIVE MAN'S RECREATION. Being a discourse of rivers, fish-ponds, fish and fishing. To which is added the laws of angling: with a new table of the particulars in this book.

London, printed by J. G[rismond]. for Rich. Marriot, 1661.. THIRD EDITION MUCH ENLARGED 1661. Small 8vo, approximately 150 x 90 mm, 5¾ x 3½ inches, FACSIMILE TITLE PAGE, 10 small copperplate engravings of fish in the text, attributed to Pierre Lombart, 2 pages of the words and music to "The Anglers Song" set by Henry Lawes, the second page printed upside down to facilitate part singing, pages: [16], 255, [17], collation A-S8, bound in full brown modern morocco, double ruled gilt border to covers with decorative blind border inside, gilt rules and decoration between raised bands to spine, gilt lettered red morocco label, new endpapers. Pages very lightly-age browned, some margins slightly trimmed, just shaving running title a couple of times, occasional light brown mark in lower margins, small piece torn from 1 top corner with loss of page number (no doubt because wrongly numbered 78 instead of 87), final page of index browned in the margins. A very good clean copy (lacking original title page as noted). Added for the first time: "A Short Discourse by way of Post-script, touching the Lawes of Angling" printed in black letter begins the final unpaginated section on S1r, followed by the Contents Table and the Index. Except for a few changes the third edition is identical with the second edition. The commendatory verses by Alexander Brome are omitted, and the chapter on the "Lawes of Angling" is for the first time included. The publisher Marriott transferred some copies of the sheets of the third edition to Simon Gape who provided them with a new title page with his name dated 1664, but of course otherwise identical to the edition of 1661. Copies of these are scarce and are usually known as the 1664 third edition. As we are lacking the title page we cannot say whether ours is the 1661 third or the Gape third, at all events ours was certainly printed in 1661. See: A New Chronicle of the Compleat Angler by Peter Oliver, page 12; English Literature 1475-1700 by Carl H. Pforzheimer, Volume III, No. 1050; The Compleat Angler 1653-1967 by Bernard S. Horne, page 8, No.3; The Library of the late John Gerard Heckscher of New York, 2011; Rodolphe L. Coigney, page 6. The printing errors are the same as listed in Goignet. MORE IMAGES ATTACHED TO THIS LISTING, ALL ZOOMABLE, FURTHER IMAGES ON REQUEST. POSTAGE AT COST.

We have been established booksellers for 42 years. We are a postal business only (strictly no callers). We are long-standing members of the P.B.F.A. the largest trade association for antiquarian booksellers in the UK. We wrap all our parcels in new materials and all our books are insured at our expense. Books may be returned if wrongly described, all costs will be met by us. ****PLEASE NOTE: POSTAGE WILL BE CHARGED AT COST, MEANING THAT POSTAGE WILL BE REDUCED ON PARCELS WEIGHING UNDER 1 KILO, AND IT WILL BE INCREASED ON MOST PARCELS WEIGHING MORE THAN 1 KILO****

Seller rating:
This seller has earned a 5 of 5 Stars rating from Biblio customers.
Biblio.com.au member since: 2010
Oxford, Oxfordshire
Ask Seller a Question

We are a postal business only, selling rare and antiquarian books on interesting subjects.

morocco
Morocco is a style of leather book binding that is usually made with goatskin, as it is durable and easy to dye. (see also...[more]
gilt
The decorative application of gold or gold coloring to a portion of a book on the spine, edges of the text block, or an inlay in...[more]
title page
A page at the front of a book which may contain the title of the book, any subtitles, the authors, contributors, editors, the...[more]
spine
The outer portion of a book which covers the actual binding. The spine usually faces outward when a book is placed on a shelf....[more]
facsimile
An exact copy of an original work. In books, it refers to a copy or reproduction, as accurate as possible, of an original...[more]
raised band(s)
Raised bands refer to the ridges that protrude slightly from the spine on leather bound books.  The bands are created...[more]
New
A new book is a book previously not circulated to a buyer. Although a new book is typically free of any faults or defects,...[more]

Biblio is showcasing the top book published every year starting in 1919. See if your favorite modern first edition made the list! Check out our collecting first editions by the year.