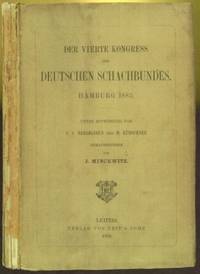 The fourth meeting of the Deutschen Schachkongresse took place in Hamburg in 1885. It was the fourth master's tournament (Deutschen Schachbund) organized since its inception six year's previously at Leipzig in 1879. As in the previous three editions, the round robin tournament was an international event, pitting German masters against the best of Europe at the time. Germany was represented by its usual field of strong masters, including Wilfried Paulsen, Max Bier, Hermann Von Gottschall, Johannes Von Minckwitz, Fritz Reimann, Emil Schallopp, Arnold Schottlaender, and Siegbert Tarrasch who had won his spot by winning the 1883 Nuremberg Hauptturnier master title. The German masters were joined from Great Britain by Joseph Henry Blackburne, who was the winner of the second Deutschen Schachbund at Berlin in 1881, Henry Edward Bird, Isidor Gunsberg, George Henry Mackenzie, and James Mason. Berthold Englisch, the winner of the first Deutschen Schachbund in Leipzig 1879, along with Johann Nepomuk Berger and Max Weiss came from Austra. Josef Noa travelled from Hungary, and Jean Taubenhaus came from Poland. The eighteen assembled chess masters participated in the single strongest international event of 1885. In spite of the presence of such strong competition, Isidor Gunsberg surprisingly took clear first place with 12 points out of 17 games. Five other players, all of them sure bets at the start of the tournament to win, tied for second place half a point behind Gunsberg. Gunsberg would go on to have impressive results in the latter half of the 1880s, including winning matches against Blackburne and Bird, before challenging Wilhelm Steinitz for the world championship in 1890. Although he would not win the world crown, Gunsberg proved himself here and later that he was one of the best chess players in the world in the 19th century.

Spine chipped away, wrappers soiled with edge wear and a 1" by 1/2" chip at back edge, some pages still unopened. A good copy a scarce item in original wrappers.

octavo
Another of the terms referring to page or book size, octavo refers to a standard printer's sheet folded four times, producing...[more]
First Edition
In book collecting, the first edition is the earliest published form of a book. A book may have more than one first edition in...[more]
soiled
Generally refers to minor discoloration or staining.
unopened
A state in which all or some of the pages of a book have not been separated from the adjacent pages, caused by a traditional...[more]
wrappers
The paper covering on the outside of a paperback.  Also see the entry for pictorial wraps, color illustrated coverings for...[more]

Children's books are among some of the most popular themes to build a book collection on. Learn a bit more in our  Brief History of Children's Literature.