Join us June 2–June 4, 2022 for our second virtual antiquarian book fair!
Preregister now for Biblio.live and get $10 to use at the fair.
home Bookstores Browse Booksellers by Specialty Bookstores Specializing in True Crime

I have been a bookseller since 1986 and closed my shop in 2001 to concentrate on mail order and do some writing. My stock includes a large selection of books on Baseball, True Crime, Ohioana, Botany, Literature, and Music. And I've cowritten two books: Catching Dreams: My Life in the Negro Baseball Leagues with Frazier Robinson (1999) and Jim Tully: American Writer, Irish Rover, Hollywood Brawler with Mark Dawidziak (2011, foreword by Ken Burns). Mark Dawidziak and I have also written introductions to four reissues of Tully's books: Circus Parade (foreword by Harvey Pekar), Shanty Irish (foreword by John Sayles), The Bruiser (foreword by Gerald Early), and Tully's breakthrough book, Beggars of Life.

BEACH GLASS BOOKS was begun in 2010 by award-winning Author Lindsay McAllister Zarse to publish her first children's book, The Magic of Topsail Island. The Beach Glass Books logo, a stylized image of a wave breaking over an open book, was created by artist/illustrator Brian Martin, who also illustrated The Magic of Topsail Island. The two later collaborated on two other children's books, MISSING! A Topsail Turtle Tale and Pirates on Friday.

Several years later author Ray McAllister (RayMcAllister.com) was able to secure the rights to his award-winning non-fiction books about the North Carolina coast, which he brought to Beach Glass. (The opportunity arose when legendary regional publisher John F. Blair, Publisher, had to be merged into another firm with the retirement of its principals.) The company became legally affiliated with Ray McAllister Books LLC and began distributing his beach books and two others. Therein followed the publication of an updated and enlarged second editions of Wrightsville Beach: The Luminous Island and Hatteras Island: Keeper of the Outer Bank, as well as the publication of a new book: Ocracoke: The Pearl of the Outer Banks. An expanded second edition of Topsail Island: Mayberry by the Sea followed.

For guidelines on having manuscripts considered for publication by Beach Glass Books, please see SUBMISSIONS at BeachGlassBooks.com 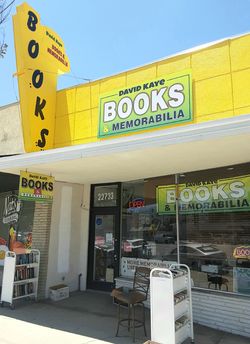 In addition to our internet business, we operate a retail store specializing in rare books and entertainment memorabilia, including original movie posters, celebrity autographs, vintage sheet music and Baby Boomer toys and games. Please phone or email at any time with questions or special requests.

We are an independent online bookstore and have been in business since 2012.

We are an on-line used bookshop specialising in True Crime, Detective Fiction and Collectibles.

General Stock Used Books. Second Hand Prose, Inc. has been selling exclusively on the Internet On-line since 1999. Our retail brick and mortar store front in Highland Maryland was closed in 1998. We accept returns at P.O. Box 203 in Fulton MD 20759. Our Business address is our Residence in Laurel MD 20723.

Even though The Book Prowler is an online bookstore, we do love to meet our customers any chance we have–at virtual and in-person book fairs and by appointment here in Sebastopol, California.

A dark edifice standing only on this digital plane of existence, the Mortuary is devoted to all that is curious in the world: from medical oddities and the criminal mind to supernatural realms and dark fantasy.

All listings include multiple images. If you require more photographs in order to make a decision, do not hesitate to send a note.

Offers are accepted on items that qualify for OA with Biblio, but you are also welcome to contact us directly with any offer and your reasons (be they personal circumstance or business) and we may offer the discount you desire (be it dollars or cents).

Ask about local delivery or pickup!

Feel free to send us your special interests if you wish to be contacted directly when we find an item that may specifically interest you.

The Small Library Company is selling the book collection belonging to the writer Angus Hall. The collection consists of literary biograry, literary fiction, crime fiction, true crime, philosophy, history, sociology, entertainment biographies and books about journalists!Please ask for photos of books most of which are in very good condition!