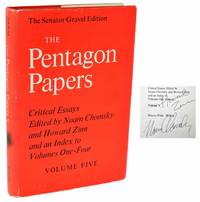 Founded in 1854 by the American Unitarian Association, Beacon Press is non-profit publisher of serious fiction, non-fiction, and poetry. The Press is responsible for many ground-breaking classics, including James Baldwin’s Notes of a Native Son, Herbert Marcuse’s One-Dimensional Man, Jean Baker Miller’s Toward a New Psychology of Women, and Mary Daly’s Gyn/Ecology.

In 1971, Beacon printed the Senator Gravel Edition of The Pentagon Papers in five volumes. This complete 7,000 page text was the first time those papers had appeared in book form. As no other publisher was willing to risk publishing such controversial material, Beacon Press became responsible for exposing the true history of U.S. involvement in Vietnam.

Beacon is also the publisher of Marian Wright Edelman’s The Measure of Our Success: A Letter to My Children and Yours and Cornel West’s acclaimed Race Matters. Recent publications include Michael Patrick MacDonald’s All Souls: A Family Story from Southie, Rashid Khalidi’s Resurrecting Empire, and titles by Pulitzer-prize winning poet Mary Oliver.