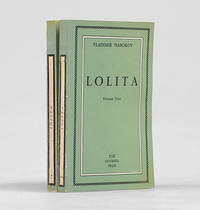 Ninety-four Olympia Press publications were promoted and packaged as “Traveller’s Companion” books, each of which is numbered and has a green text-only cover. (The Ophelia Press line was far larger, using the same design, but pink covers instead of green.)

Girodias later had troubled dealings with his authors including copyright issues. For example, Nabokov was not satisfied with the publisher and its reputation. As result of essentially annoying too many powerful people, Girodias left France and briefly re-established Olympia Press in New York in the 1960s and in London in the early 1970s. Other incarnations of the company, some with Girodias’ support, emerged in Germany and Italy. Olympia Press has been re-established and is currently operating out of Washington, London, and Frankfurt.

Grove Press in the U.S. published The Olympia Reader, a best-selling anthology containing material from some of Olympia’s most popular works, including material by William S. Burroughs, Miller, Trocchi and others. Another well-known collection is The Best of Olympia, first published by the Olympia Press in 1963 and reprinted by New English Library in 1966.

First editions from Olympia Press have no additional printings listed on the copyright page.